Protestors have gathered in major cities like Yangon, Naypyidaw, and Mandalay 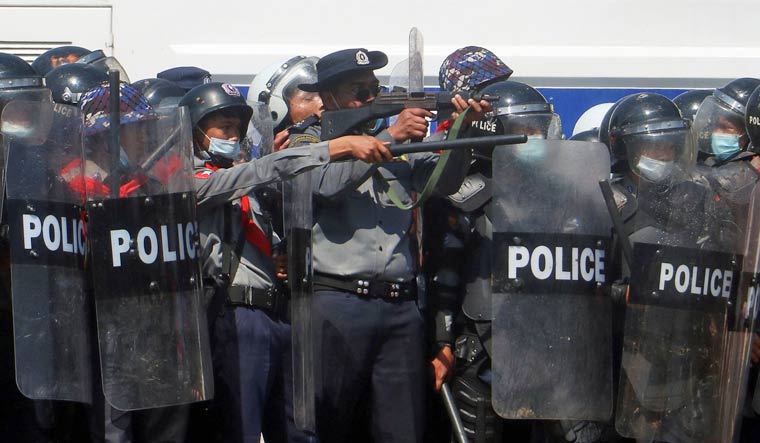 A police officer aims during clashes with protestors rallying against the military coup and demanding the release of elected leader Aung San Suu Kyi, in Naypyitaw, Myanmar | Reuters

The police, on Tuesday, fired gunshots into the air and used water cannon, tear gas and rubber bullets at protestors in Myanmar, who have been taking to the streets against the military coup which took place on February 1. Leader of National League for Democracy Aung San Suu Kyi was placed under house arrest following the coup.

The police are said to have taken these measures to disperse the protestors. The protestors have, however, refused to disperse. This is the fourth consecutive day they have come out in support of Suu Kyi. Military leader General Min Aung Hlaing in his first address since the coup has said that they would eventually hold a new election. Aung Hlaing in the address repeated unproven allegations of fraud in elections of 2015.

Protestors have gathered in major cities like Yangon, Naypyidaw, and Mandalay. The protestors in Yangon and Mandalay have defied curfews imposed and a ban on a gathering of more than five people.

These protests are the largest since 2007 when protestors came out against the military rule. The military rule that began in 1962 ended in Myanmar in 2011. While the military began withdrawing from civilian politics in 2011, it never really gave up overall control. In 2015, Suu Kyi's party, National League for Democracy, won the elections by a landslide. Protestors have been demanding Suu Kyi's release.

Sources told Reuters that protestors were being treated for wounds from rubber bullets. Police also arrested about 27 protestors in Mandalay city.

Protestors also seek to abolish the 2008 constitution drawn up under military supervision, which gives generals veto power in the parliament and thus, control over several ministers. Myanmar so far has recorded 31,177 deaths from more than 141,000 cases.