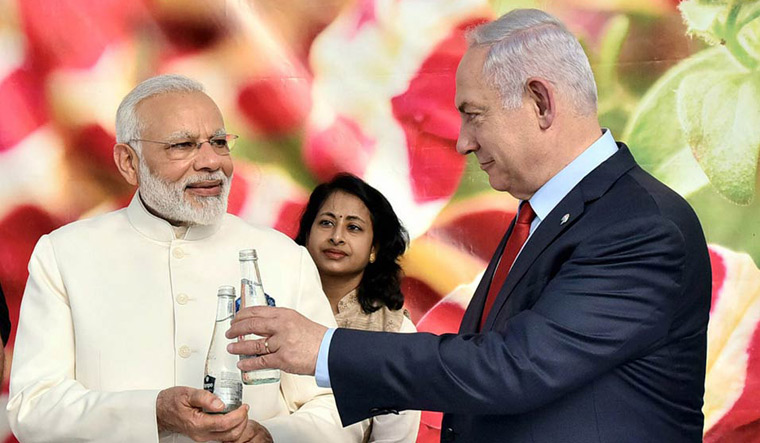 Aero India, the country's premier aerospace expo, gets under way in Bengaluru on Wednesday. As many as 601 exhibitors—523 Indian and 78 foreign—and 14 countries have confirmed participation in the event, which is being held in the shadow of COVID-19.

There was debate in India on going ahead with Aero India this year given worries about COVID-19. However, now participation in Aero India could become a political issue in another country that has enthusiastically participated in previous editions of the air show: Israel.

Israeli newspaper Haaretz reported on Monday that Prime Minister Benjamin Netanyahu intervened to grant permission for a delegation of Israelis from various companies to fly to Bengaluru for Aero India.

The Israeli defence ministry had scrapped plans to attend Aero India given the COVID-19 situation, but three major companies—Israel Aerospace Industries, Rafael Advanced Defense Systems and Elbit Systems—"weren’t about to forgo the opportunity, certainly not when their major foreign competitors had already arrived" in Bengaluru, Haaretz reported.

The companies chartered an aircraft of Arkia Israel Airlines to fly to Bengaluru with around 50 people.

A committee of government officials that was constituted to grant permissions for special requests to fly in or out of Israel during the lockdown had refused to allow permission for the Israeli Aero India delegation to leave from Tel Aviv on Monday. Haaretz reported, "It took someone to call Prime Minister Benjamin Netanyahu's office directly and the matter was resolved in short order. In the dead of night, an email was sent to Health Minister Yuli Edelstein and Deputy Health Minister Yoav Kish that tersely stated that 'the prime minister has approved the delegation’s departure'."

The delegation was allowed to travel on condition that members be fully vaccinated and "each passenger will have to be given 'a personal suit' in order to comply with COVID restrictions", Haaretz reported.

India has been a major buyer of Israeli weapons for nearly three decades now. According to SIPRI, India accounted for 49 per cent of Israel's arms exports from 2013 to 2017.

IAI, Rafael and Elbit have all signed significant deals with the Indian services and with Indian companies for joint ventures such as development and manufacturing of air defence missiles and drones. Rafael is the supplier of the SPICE guided munition that the Indian Air Force used in the Balakot attack in 2019.