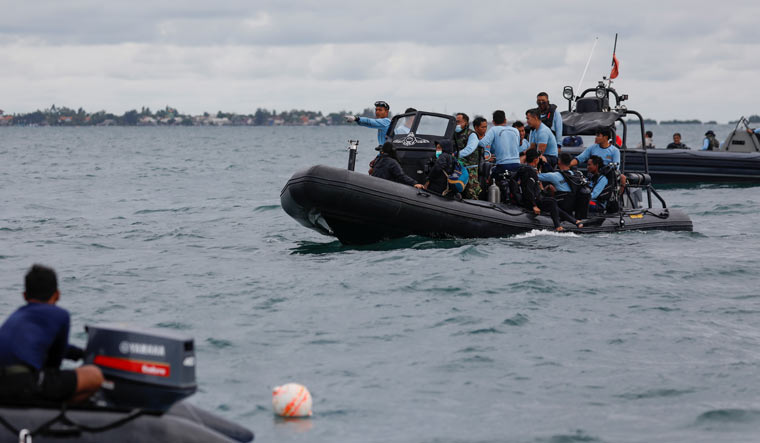 Indonesian navy divers stand on a rubber boat during the search and rescue operation for the Sriwijaya Air flight SJ 182, at the sea off the Jakarta coast | Reuters

Indonesian authorities have retrieved one of the black boxes from Sriwijaya Air fight 182, which crashed into the Java sea on January 6, a Navy spokesman said on Tuesday.

The device, later confirmed to be the flight data recorder, is being transported to Jakarta’s port. The box will provide valuable information into why the Boeing 737-500 carrying 62 people crashed. Both black boxes were located on Sunday.

No survivors have been found yet, though human remains and pieces from the aircraft have been recovered from the sea. All 62 passengers are expected to have perished in the disaster.

The nearly 27-year old plane, flying from Jakarta to Pontianak on Borneo island, crashed into the Java sea shortly after take-off, not too far away from where Lion Air Flight 610 crashed in 2018. There are still no details about the possible cause for the crash, with the flight having taken place under rainy conditions.

However, the crash does raise attention to Indonesia’s aviation sector, which saw 697 fatalities from air crashes in just the last decade alone (including both military and private planes) according to Aviation Safety Network data, as reported by Reuters. As an archipelago, Indonesia is heavily reliant on air transport to connect its over 17,000 islands.

The airline itself has lost five Boeing 737s since 2008, Flight Global reported, most of them due to incidents occurring during landing. While only one of these resulted in a fatality, it raises questions over the airline’s safety record. The latest crash comes a year after Indonesia’s flag airline, Garuda Indonesia, ended its partnership.

Sriwijaya Air is Indonesia’s no.3 3 airline group, and according to a Reuters report, had become so by acquiring old planes at cheap prices and flying neglected routes.

The aircraft reportedly passed a flight inspection in December, according to the transport ministry.