Joe Biden says he has ‘great confidence’ in his son Hunter 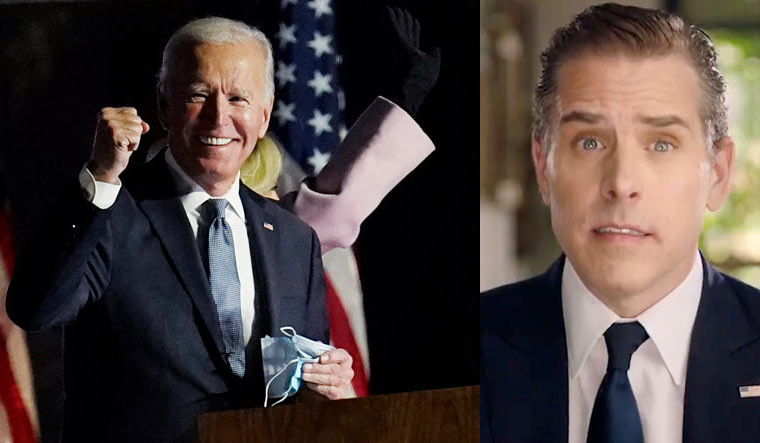 Collage of US President-Elect Joe Biden and his son Hunter | AP, Reuters

resident-elect Joe Biden, while being interviewed by Stephen Colbert on the ‘Late Night Show,’ said he and his wife, Dr Jill Biden, have "great confidence" in Hunter Biden. Hunter Biden announced last week that federal authorities are investing his "tax affairs."

The President-elect’s younger son, who is known to have business dealings in several countries, has long been a target of the Trump campaign, for his dealings in the Ukraine and China.

“I take this matter very seriously but I am confident that a professional and objective review of these matters will demonstrate that I handled my affairs legally and appropriately, including with the benefit of professional tax advisors,” Hunter Biden had said on December 10.

"What are you going to do and how will you sustain each other for the attacks you know are coming your way?" Colbert asked. "Case in point, I know you want to be as bipartisan and reach across the aisle, but as much as you don't want it to happen, you know that the people who want to make hay in Washington are going to try to use your adult son as a cudgel against you. How do you feel about that, and what do you have to say to those people?

"I think it's kind of foul play," Joe Biden said. "Look, it is what it is. He's a grown man. He's the smartest man I know. I mean, in a pure intellectual capacity. As long as he's good, we're good,” he added, defending his son.

Colbert asked Biden about Republicans who haven’t yet acknowledged his victory in the 2020 election.

"Look, they're in a tough spot," Biden said. "I know everybody says, 'Well, they should just step up.' How can I say this? A number of them sent messages to me four weeks ago: 'Give me time, Joe. Give me some time.' It's fine by me. It's fine by me. We won."

At the interview, Colbert asked Biden’s wife Dr Jill Biden on the recent attack on her using the title of Dr. A Wall Street Journal opinion writer Joseph Epstein suggested that she drop the title on account that she wasn’t a medical doctor. To this, Dr Biden said, “I was surprised by it.” She also added that she was “Was just overwhelmed by how gracious people were to me.”

Colbert also asked Biden, who has had to deal with personal loss and grief, how he would address the grief of a nation that has faced more than 300,000 deaths due to the pandemic. To this, Biden said, “The role of the presidency is to say, grieve. There is a reason to grieve. You’ve had great loss, but there will come a time, remind yourself, but the time will come, when you think of your husband, wife, son daughter, mom or dad, you will get a smile to your lips before you get a tear to your eye. That’s when you know you are going to make it.”