The lawmakers who were disqualified were earlier banned from contesting elections 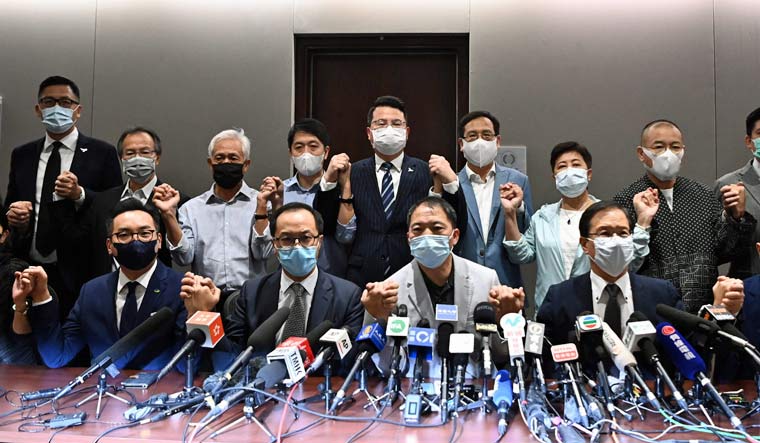 Hong Kong's government disqualified four of its pro-democracy legislators. Rest of the city's pro-democracy lawmakers-- 19 of them-- are expected to resign en-masse on Wednesday. The announcement is expected to be made via a news conference.
Beijing, in recent months, has moved to clamp down on opposition voices in Hong Kong with the imposition of the national security law, after months of anti-government protests last year rocked the city, an AP report reads. One of China's top lawmaking committees, The National People's Congress Standing Committee ruled that Hong Kong could remove any legislator deemed a threat to national security without going through the courts.
The four lawmakers--Alvin Yeung, Dennis Kwok, Kwok Ka-ki and Kenneth Leung were disqualified on Tuesday. They were initially banned from contesting legislative elections, which was scheduled to take place on September 6. the elections were postponed by a year, for which the government cited the coronavirus pandemic as the reason.
The pro-Beijing camp already makes up a majority of the city's legislature and would allow lawmakers to pass bills favoured by Beijing without opposition.


According to Hong Kong's Chief Executive leader Carrie Lam, the disqualification was "constitutional, legal, reasonable and necessary". After the National Security Law was imposed in July, which gave authorities the power to arrest, people over social media posts that criticised Beijing, activists like Nathan Law and Simon Cheng fled Hong Kong fearing prosecution.