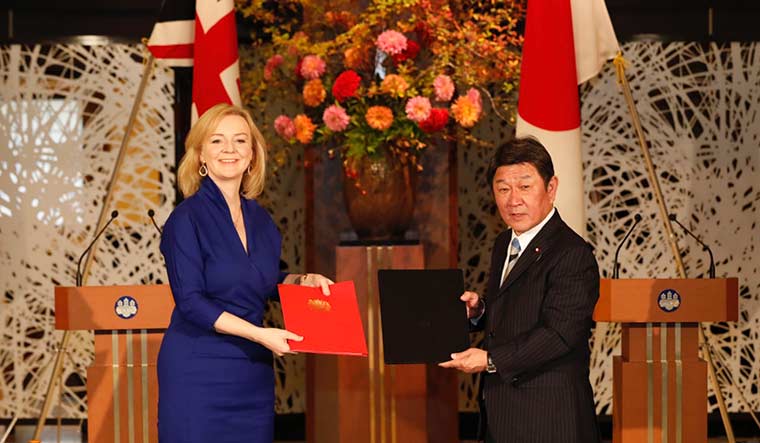 The deal, which would make 99 per cent of British exports to Japan tariff-free, would increase trade by £15.2 billion ($19.9 billion) in the long run and would remove British tariffs on Japanese in stages to zero in 2026 (the same terms as in the Japan-EU trade agreement).

The agreement also includes a strong commitment from Japan to support UK joining the Trans-Pacific Partnership (TPP), one of the world’s biggest free trade areas, covering 13 per cent of the global economy and more than £110 billion of trade in 2019.

The UK – Japan Comprehensive Economic Partnership Agreement was agreed in principle on September 11, 2020. In its press note, the UK government said it hoped to secure free trade agreements with countries covering “80 per cent” of UK trade by 2022.

Critics of the deal, however, point out that it would only boost the UK’s GDP by 0.07 per cent, a fraction of the economic damage Brexit was expected to inflict—a 2019 working paper by the Peterson Institute for International Economics estimated that, as per 12 economic simulation models of Brexit’s impact, the UK would suffer GDP losses of between 1.2 to 4.5 per cent.

The deal will take effect from January 1, 2021; the same day the UK is expected to drop out of all EU trade agreements including the single market, customs union. The outcome of ongoing UK-EU negotiations over a trade deal will have a great impact on the kind of economic relation the UK has with the EU on the first day of 2021. The UK and EU trade have nearly $1 trillion in annual trade. However, talks between the two have yet to result in a breakthrough, with UK Trade Secretary warning that “if the EU aren’t prepared to do a deal that allows the UK to retain its sovereignty,” then the UK would go for “Australia style terms”—another way of saying there would be no trade agreement and possibly only a commitment to having trade on good terms.