Sharif has alleged that the military had rigged the 2018 vote 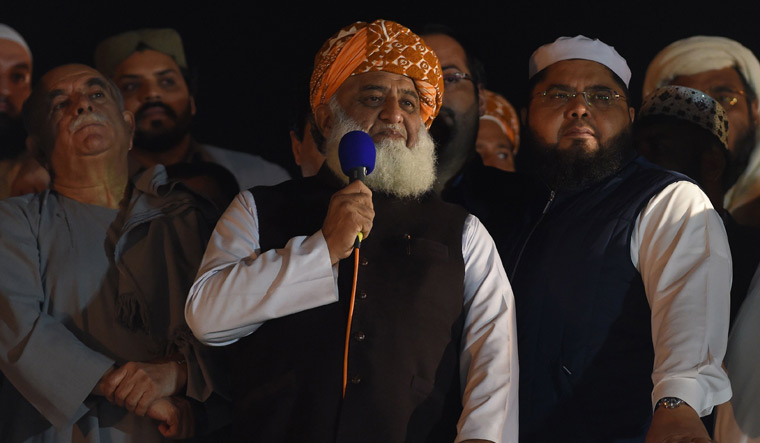 According to PDM's steering committee convener Ahsan Iqbal, Sharif proposed 67-year-old Rehman's name as the alliance president and it was endorsed by PPP chairman Bilawal and others, the Dawn newspaper reported.

Sharif had initially proposed that Rehman should be appointed as the president on a permanent basis, but the idea was opposed by Bilawal and Awami National Party (ANP) leader Amir Haider Hoti, who suggested that the office should be given on a rotational basis to leaders of the constituent parties, the paper reported, citing sources.

There was an agreement among the leaders that Rehman should lead the PDM in the first phase as he had already led a demonstration, dubbed as Azadi March', against the present Pakistan Tehreek-i-Insaf (PTI) government last year.

"Since the Maulana has already done a rehearsal and his party is more disciplined and has the ability to effectively mobilise the masses, therefore, in the first and decisive phase, he is the best choice," said one of the participants in the meeting.

Commenting on Rehman's appointment, Science and technology minister Fawad Chaudhry said it was a sad day for Pakistan that an "extremist Mullah" with ties to terrorist groups is selected to lead the opposition movement.

He said people of Pakistan never allowed extremists to lead or mainstream politics.

Rehman's nomination to lead the movement came only a week before the formal launch of the anti-government campaign by the opposition parties with PDM's first public meeting scheduled for October 11 in Quetta, the provincial capital of Balochistan.

Iqbal said it had been decided that the three major parties in the 11-party alliance would share the three top offices of the PDM on a rotational basis. The offices of senior vice-president and the general secretary of the PDM would be given to the PML-N and the PPP.

Iqbal said the opposition had decided to launch the movement for the supremacy of the Constitution, democracy, the independent judiciary and for the security of the rights of Pakistanis.

The opposition parties' heads in their meeting also passed a resolution. Through it, the PDM leaders condemned the Imran Khan government's statement linking the alliance to India, stating that such a statement was a proof of the government's frustration.

It also condemned the allegation of being anti-state, an accusation levelled against three-time premier Sharif, the report said.

On September 20, the leaders of major opposition parties announced formation of the PDM and launch of a three-phased anti-government movement under an action plan starting with countrywide public meetings, protest demonstrations and rallies before a decisive long march towards Islamabad in January 2021.

The opposition leaders had announced that they would use all political and democratic options, including no-confidence motions and en mass resignations from the parliament to seek "the selected prime minister's resignation and an end to the role of the establishment in politics."

They also issued a 26-point declaration in the form a resolution containing various demands, including "end of establishment's interference in politics", in an apparent reference to the country's powerful army.

Sharif has alleged that the military had rigged the 2018 vote that brought Imran Khan to power.

The powerful army, which has ruled Pakistan for more than half of its 70 plus years of existence, has hitherto wielded considerable power in the matters of security and foreign policy.