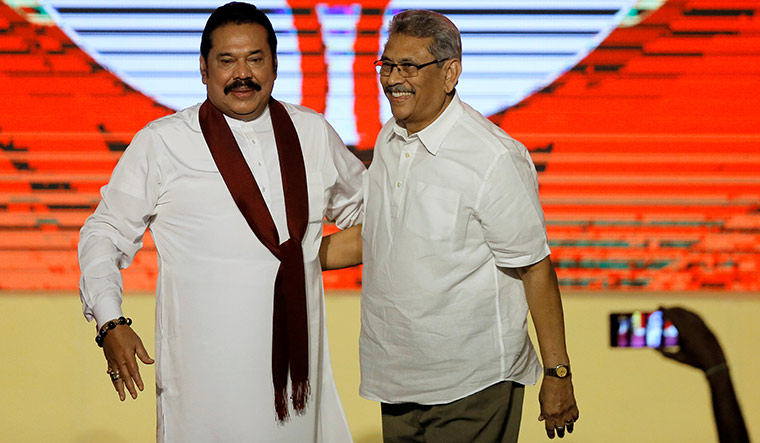 The impending general elections in Sri Lanka, which are scheduled to be held on August 5, present a significant trajectory of power politics in the Indian Ocean region that features China’s expanding dominance. As the election campaign heats up in the island nation, the political parties have no dearth of domestic issues to discuss and debate. But what observers are interested most in are the strategic investments and foreign policy decisions that dominate the election campaign and shape the domestic political discourse. This very pattern exemplifies the role of Sri Lanka in catalysing strategic power projection by the major regional players in the Indian Ocean in the coming years.

“China and Sri Lanka are true friends sharing weal and woe.” This is an excerpt from an official statement by the Chinese Embassy in Sri Lanka while declaring its donation of 3,00,000 face masks to the island nation as part of China’s mask diplomacy amid COVID-19. The pandemic has rejuvenated the Sino-Sri Lankan engagement through consistent aid diplomacy from the Chinese side. China has granted $500 million as a concessionary loan upon request from President Gotabaya Rajapaksa apart from sharing the COVID-19 combat experience with the Sri Lankan authorities. China is the only country that has created a COVID-19 emergency fund as part of its COVID-19 aid initiative. Sri Lanka was also included in Jack Ma’s COVID-19 aid package along with a few south and Southeast Asian countries. Interestingly, the US and EU pledges of assistance came much later, and the Chinese aid had already started flowing by then.

China’s aid diplomacy was an effective response as Sri Lanka is a Belt and Road Initiative (BRI) partner country. But there are a few concerns—immediate and long term. The immediate concern is what does China expect in return immediately from a country like Sri Lanka and the long-term one will be how deep China has dug into the political independence of Sri Lanka. China’s immediate expectation from countries like Sri Lanka does not end with the recognition of ‘One-China Policy’. Rather, it is a pricey issue, which is the commendation and espousal of the Chinese model/narrative. It could be anything from COVID-19 management to Xinjiang’s internment camps to the efficiency of Chinese model of development followed by its responsible global role.

Sri Lanka has been an active player in China’s public relations campaign against the West’s attempts to highlight human rights violations in Xinjiang. It is significant to find that Sri Lanka appreciated China’s ‘achievements’ in bringing modernisation and development to Xinjiang and for effectively managing the counter-terrorism efforts in the region. In the specific case of COVID-19, countries like Sri Lanka facilitated the Chinese public relations exercise to identify China as an efficient COVID-19 management model, but not as its origin. But this offers an indication that Sri Lanka joins China in (selectively) challenging the dominant and principal normative aspects of the current global order, which includes democracy, human rights, religious freedom, right to privacy and transparency, while being vocal about protecting the internal sovereignty of the nation states. This highlights the memory of the Sri Lankan Civil War and how China’s generous military and diplomatic aid enabled the island nation to win the war as well as withstand the diplomatic pressure from the West and United Nations Human Rights Council (UNHRC) on human rights and civil liberties.

Money, arms, and diplomatic cover from China enabled the Mahinda Rajapaksa regime to lead the war to its logical conclusion. The Civil War facilitated China’s effortless entry into the region by being Sri Lanka’s biggest donor that offered aid of $1 billion. This was followed by millions of dollars’ worth of weapons and six F7 fighter jets to the Sri Lankan Air Force as a ‘gift’. The victory in the Civil War redefined Sino-Sri Lankan bilateral relationship in such a way that the Rajapaksa regime has been championed by the Chinese side.

What happened in this relationship in the post-Civil War scenario is nothing but Sri Lanka finding its big brother in China and China ingeniously enhancing its benevolence upon the island nation. But what generated concern was the modus operandi of this bilateralism. Sri Lanka has emerged as an ideal case study for how bilateralism operates through ‘gifts, concessions and favours.’ Many of these projects are initiated through unofficial channels and projected as a gift from Xi Jinping especially since 2012. These gifts cannot be “no strings attached,” as it is claimed. The absence of strings is probably correct in the case of China being not concerned in promoting democracy, transparency, human rights and political justice in Sri Lanka because China lacks the moral authority to raise such political reservations. But these strings are attached for economic and strategic concessions.

It was only organic that Xi Jinping’s dream project of BRI eyed Sri Lanka as a natural partner since its inception even though Sino-Sri Lankan engagement is currently overwhelmed with criticism as the Chinese-funded infrastructure projects under the banner of BRI have emerged to be debt-driven. China has been a major trading partner for Sri Lanka with a trade surplus in China’s favour. The Hambantota port and the debt trap diplomacy became part of the foreign policy debates eventually. What could raise eyebrows is the very nature of this bilateral engagement and its evolution.

As per a The New York Times report in 2018, the China Harbour Engineering Company (CHEC) Ltd. had given $7.6 million for Mahinda Rajapaksa’s re-election bid in 2015. However, he lost to Maithripala Sirisena. This is the same year that Mahinda Rajapaksa alleged India’s role in pouring funds to the Sirisena camp to affirm his political rival’s victory. Nevertheless, Sirisena ended up winning and there was a clear polarisation in Sri Lanka’s domestic political space. The foreign (strategic) investments providing fodder for the election campaign itself represents how deeply these investments have been influencing the daily affairs of the Sri Lankan common man. Building “national assets” through foreign investments and “selling the national assets” to foreign firms have provoked nationalist sentiments too.

The immediate response is China’s reconsideration on the development of Colombo Port’s Eastern Container Terminal (ECT). This was part of a tripartite memorandum with India and Japan and this decision has been taken due to an agitation by the employees of the Sri Lanka Ports Authority (SLPA). The ECT protests and the Sri Lankan government’s mixed signals towards the Millennium Challenge Corporation (MCC) Agreement (a voluntary US-funded initiative for the development projects in Sri Lanka) exemplify the pattern of nationalist assertions. Interestingly, this was also initiated by the Sirisena-Wickremesinghe government. This uncertainty remains for the Indian participation in the management of Mattala airport too. This airport was built on a high-interest Chinese loan and later it notoriously turned out to be the world’s emptiest airport. Though this nationalist fervour was initiated by Mahinda Rajapaksa’s move of seeking high-interest loans from China, lately the Sri Lankan nationalists have expressed reservations about India’s involvement as opposed to the Chinese projects.

If we read the recent news, China, which has learned from the previous mistake of only endorsing the Rajapaksa brothers, has been expanding its influence beyond the Rajapaksa camp. The Chinese machinery in Sri Lanka is digging deeper into various stakeholders in domestic politics that includes the influential Buddhist groups to small and big political parties to trade unions. In the name of COVID-19 management, the Chinese Communist Party’s (CCP) international department conducted a videoconference of various political parties in Sri Lanka followed by the emissaries’ behind-the-scene meetings. China also has been showing its interest in understanding the voters’ sentiments. But the depth of its influence and the nature of this relation is easy to envisage in China’s action of donating masks to the Sri Lankan election commission for the safe conduct of elections.

China’s investments have changed the Sri Lankan political space and its narratives. The foreign investments and foreign policy decisions had always been above partisan politics. Unfortunately, that is not the case anymore and it has become the campaign issue currently. The question is whether the political independence and freedom of choice of Sri Lankan people are compromised or not. With China already establishing its dominance in Sri Lanka’s maritime economy, it is expanding its clout to the island nation’s political equations. Expectantly, the political stakeholders and the nationalist block will be able to foresee the evolving predicament of their domestic political scene, so that they could call the shots in future instead of surviving as a tributary state of Beijing. And, if not? It is China that is going to win the elections.

Dr. Veena Ramachandran is an Assistant Professor in the Department of Humanities and Social Sciences, Birla Institute of Technology and Science, Pilani Campus, Rajasthan.