China, reportedly, envisions having a fleet of up to six aircraft carriers by 2035 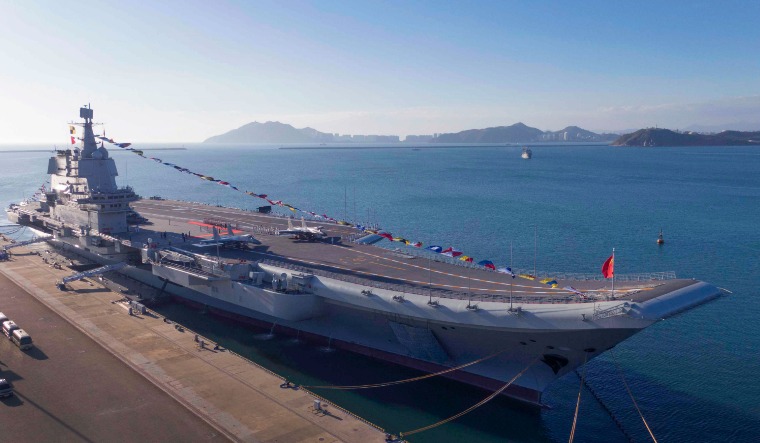 The rapid growth of the People's Liberation Army Navy (PLAN) has been a point of concern for the US and countries like India and Japan.

“Workers are also starting the keel-laying for the new carrier’s sister ship. Both ships have been built by the Jiangnan Shipyard outside Shanghai," the publication reported. Laying of the keel, the base structure of a ship's hull, marks the beginning of full construction. Initial work on the fourth aircraft carrier had started in 2018, but was stopped in 2019, the South China Morning Post reported.

“Construction for the second Type 002 will be faster than the first one because workers have learned and overcome a lot of problems building the first one. It’s a challenging job because the Type 002 is our country’s first domestically designed aircraft carrier," the South China Morning Post quoted a source as saying.

The third and fourth carriers will be different in design from the Liaoning and Shandong and will be significantly larger. Based on analysis of satellite imagery, US think tank Center for Strategic and International Studies has estimated that the third aircraft carrier would have a displacement of up to 85,000 tonnes, nearly 15,000 tonnes more than the Shandong. In comparison, the Indian Navy's INS Vikramaditya displaces about 45,000 tonnes. Chinese state-run media claim the third aircraft carrier could carry over 50 aircraft.

The Liaoning and Shandong use a 'ski-jump' to launch fighter aircraft; a ski-jump is a curved structure at the end of the flight deck, which allows a jet to take off at lower speed than required for sustained flight. Ski-jumps are used on aircraft carriers that lack catapults, which can impart momentum to the aircraft. A ski-jump limits both the number of jets that can be launched at a time and also restricts the weight at which an aircraft can take off.

The presence of electromagnetic catapults would, theoretically, allow these Chinese aircraft carriers to launch aircraft at shorter intervals. It would also allow combat aircraft to take off at maximum possible weight, imparting greater combat range and higher weapons load and allow operation of larger aircraft like airborne-early warning systems.

The South China Morning Post reported the third aircraft carrier could operate a stealth fighter as its main aircraft. Media reports have claimed China envisions having a fleet of up to six aircraft carriers by 2035 to effectively challenge the US Navy.