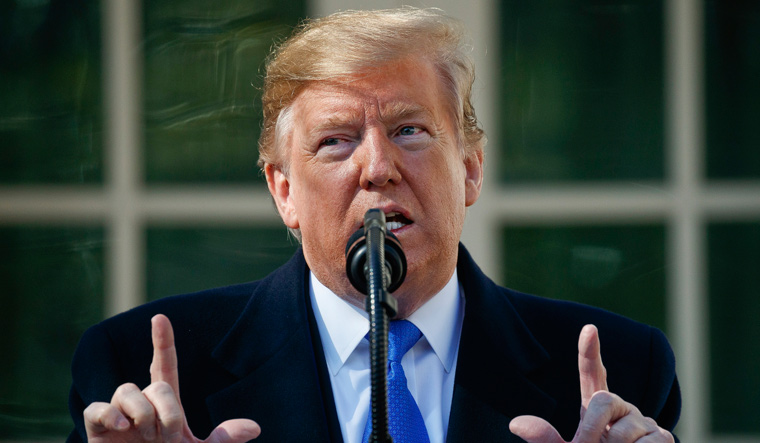 "Today, I signed a legislation and an executive order to hold China accountable for its oppressive actions against the people of Hong Kong," Trump told reporters at a White House press conference.

The Hong Kong Autonomy Act was passed unanimously by the Congress, he said, adding that the law gives his administration powerful new tools to hold responsible the individuals in the entities involved in extinguishing Hong Kong's freedom.

"We have all watched what happened, not a good situation. Their freedom has been taken away, their rights have been taken away and with it goes Hong Kong in my opinion, because it will no longer be able to compete with free markets. A lot of people will be leaving Hong Kong, I suspect, and we are going to do a lot more business because of it... because we just lost one competitor.”

"We lost a very, very serious competitor, a competitor that we incentivised to take a lot of business and do well, and we gave them a lot of business by doing what we did. We gave them things that nobody else had the right to do and that gave them a big edge over other markets, and because of that edge, they have some really historic business, tremendous business, far bigger than anybody would have thought years ago when we did this gift. It was really a gift to freedom," Trump said.

The president also said he signed an executive order ending US preferential treatment for Hong Kong.

"Hong Kong will now be treated the same as mainland China. No special privileges, no special economic treatment and no export of sensitive technologies. In addition to that, as you know, we are placing massive tariffs and have placed very-large tariffs on China. First time this has ever happened to China, billions of dollars have been paid to the US, of which I have given quite a bit to the farmers and ranchers of our country because they were targeted, and that has been going on for three years," he said.

“This was the first time anybody did anything like that and prior to the plague pouring in from China, they were having the worst year economically in 67 years,” Trump said.

"I do not want them to have a bad year. I want them to have a good year, but they were taking advantage of the US for years and that is stopping. But then the virus came in and the world is a different place, but we are now getting back and one of the reasons the market is doing so—it is almost at the point that it was at prior to the plague. It is a great thing, it is an amazing thing what our people have done and what they have endured," he said.

"We imposed historic tariffs, we stood up to China's intellectual property theft at a level that nobody has ever come close, we confronted on trustworthy Chinese technology and telecom providers. We convinced many countries and I did this myself for the most part, not to use Huawei because we think it is an unsafe security risk, it is a big security risk. I talked many countries out of using it. If they want to do business with us, they cannot use it," he said.

In his lengthy opening remarks, Trump rued that his predecessors "were really a puppet" of China.

"Make no mistake, we hold China fully responsible for concealing the virus and unleashing it upon the world. Could have stopped it, they should have stopped it. It would have been very easy to do at the source when it happened. In contrast, [Democratic presidential candidate] Joe Biden's entire career has been a gift to the Chinese Communist Party and to the calamity of errors that they have made. They have made so many errors and it has been devastating for the American worker," he said.

China, Trump alleged, has taken out hundreds of billions of dollars a year from the US.

"We rebuilt China, gave them all the credit in the world. I do not give the credit for the people that used to stand here because they allowed this to happen where hundreds of billions of dollars were taken out of the US Treasury in order to rebuild China. There is no country in the world that has ever ripped off the US like the incredible job that they did on this country and the people that ran it, possibly it is one of the reasons, certainly it is one of the very big reasons trade and things related to trade that I got elected in the first place," he said.

Trump alleged that his Democratic challenger, former vice president Joe Biden, supported China's entry into the World Trade Organization, one of the greatest geopolitical and economic disasters in world history.

"They were given all sorts of advantages, they were considered a developing country. As a developing country, they got tremendous advantages over the US and other countries, and they took advantage of those advantages and then some. Biden personally led the effort to give China the permanent most-favoured nation status, which is a tremendous advantage for a country to have. A few countries have it, but the US does not have it, never did, probably never even asked for it because they did not know what they were doing," Trump said.