US says China’s claim over South China Sea is unlawful

China says US not directly involved in these disputes 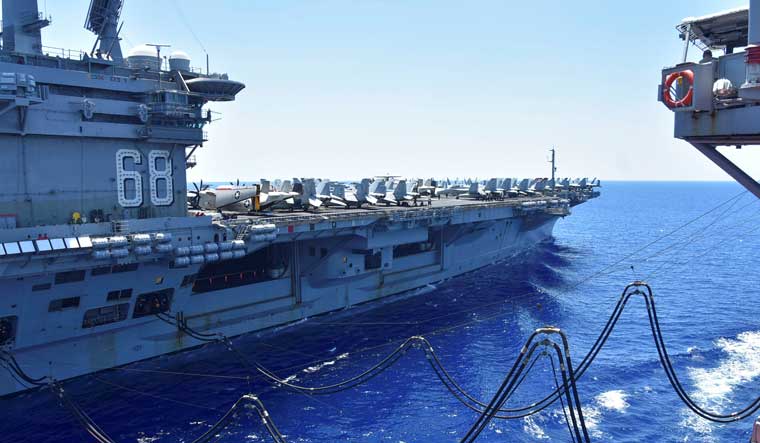 The US, as per a Reuters report has called China’s claims to off-shore resources in the South China Sea (SCS) unlawful.  China in the meantime, firmly opposed to these claims by the US saying that the US is not a country directly involved in disputes.

The Chinese Embassy in the US said that the US, “Under the pretext of preserving stability, it is flexing muscles, stirring up tension and inciting confrontation in the region”.

The US, while championing “free and open Indo-Pacific”, reaffirmed its strong commitment to its ASEAN partners and key allies Japan and Australia.

As per US Secretary of State Mike Pompeo’s statement on China’s SCS claims, the world won’t allow Beijing to treat the South China Sea as its maritime empire. And Beijing’s claims to offshore resources across most of the South China Sea are completely unlawful, as is its campaign of bullying to control them.

The statement comes when two US nuclear-powered aircraft carriers - Nimitz and Ronald Reagan - with 120 fighters are conducting military exercises in the South China Sea.

Relations between the US and China had been becoming increasingly tense since both have been involved in a trade war in 2018. Tensions escalated with the coronavirus pandemic, that originated in a wet market in the Wuhan region of China and after China imposed the national security law in Hong Kong that endangers the semi-autonomous state enjoyed by the city. The US also passed sanctions on China over its mistreatment of the Uyghur Muslims by holding them in concentration camps.

If China was to establish a claim on the South China Sea by the nine-dash-line, the whole area would be under China’s control. Countries around the sea including the Philippines, Vietnam, Brunei and Malaysia also claim parts of the area, as does Taiwan.