In calls with world leaders, Trump is rude to women, deferential to strongmen: Report 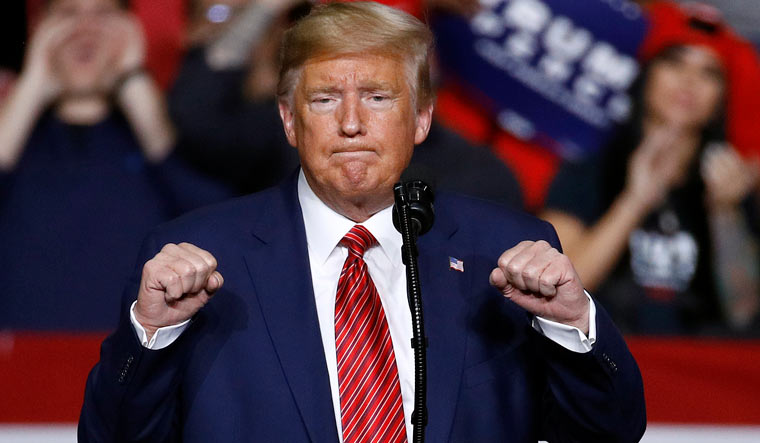 US President Donald Trump has been very clear about his favourites in the international stage; antagonising long-time US allies like Germany and Canada while being friendly to frequent rivals like Russia and North Korea.

In phone calls with world leaders like German Chancellor Angela Merkel or former UK Prime Minister Theresa May, Trump could be belligerent to the point of bullying, claims a CNN report by Carl Bernstein—who helped expose the Watergate scandal—citing sources interviewed over a four-month period. However, when speaking to leaders like Turkish President Recep Erdogan and Russian President Vladimir Putin, Trump would appear to be unprepared, even deferential, allowing himself to be manipulated on key matters of foreign policy.

The report, claiming to have accessed details about hundreds of Trump’s phone calls, suggests that Trump has a pattern with world leaders: Bullying and demeaning with those he perceives to be weak; swaggering and approval-seeking with authoritarians, bragging about his achievements to Saudi Arabia’s crown prince Mohammed bin Salman and North Korean Supreme Leader Kim Jong Un.

Trump was reportedly particularly nasty with Merkel, who he called “stupid” and accused of being in Russia’s pocket (and who calmly took his abuse “like water off a duck’s back”). Germany officials reportedly took care to minimise the number of people aware of the president’s calls with the chancellor given how problematic they are. Likewise, Trump would often get agitated in calls with May, who he called “a fool” and with whom he would be “humiliating and bullying”. May was reportedly flustered by Trump’s demeanour.

White House Press Secretary Sarah Matthews responded after the report’s publication, saying, "President Trump is a world-class negotiator who has consistently furthered America's interests on the world stage. From negotiating the phase one China deal and the USMCA to NATO allies contributing more and defeating ISIS, President Trump has shown his ability to advance America's strategic interests."

The reports of Trump’s differential treatment of world leaders comes amid allegations that he sat on intel claiming Russia was offering a bounty to the Taliban to kill US soldiers in Afghanistan—having known about it months before the New York Times reported the details. The White House, however, has denied whether Trump was briefed.

According to the new CNN report, Erdogan called Trump up the most—sometimes twice a week—and possibly influenced US policy on Syria, which included pulling American forces out of the country just prior to a Turkish invasion of territory held by US-backed Kurdish forces.

The report suggests that were transcripts of his phone calls to be released, the fallout would extend beyond bipartisan lines, with Bernstein suggesting that former officials like Fiona Hill testify about the calls—given the likelihood that Trump will invoke executive privilege to prevent transcripts from being released.