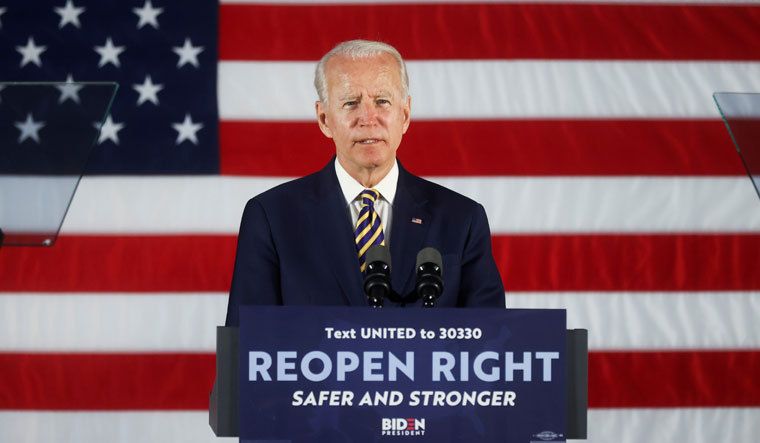 Joe Biden at a campaign event in Darby, Pennsylvania | Reuters

Former US vice president Joe Biden would formally accept his Democratic presidential nomination at the party's scaled-down convention in Wisconsin's Milwaukee city on August 20, organisers of the mega event said as they announced plans to go virtual during the four-day event.

Biden, 77, is challenging Republican incumbent President Donald Trump, 74, in the November 3 presidential elections. As per major opinion polls, he is leading Trump by more than eight percentage points.

In view of the coronavirus pandemic, the Democratic National Convention Committee (DNCC) on Wednesday announced their convention plan to broadcast from Milwaukee and across the nation to reach out to all Americans.

At the convention, Democrats will officially nominate Biden as the Democratic nominee for president, the DNCC said.

It also reiterated the party's commitment to protect public health while transforming the convention experience for delegates and viewers.

Host city Milwaukee would anchor the events for the week, convention planners said. Programming would include both live broadcasts and curated content from Milwaukee and other satellite cities, locations and landmarks across the country, they said.

“The city of Milwaukee has been an incredible partner and we are committed to highlighting Wisconsin as a key battleground state at our convention this August. This will be a convention for all Americans who wish to join our mission to win the battle for the soul of this nation and build a fairer, more united country for us all,” he said.

Anchored every night in Milwaukee, the convention will include four nights of programming from August 17-20. The overall production of the convention's programme, including the satellite broadcasts, will be led by nine-time Emmy award-winning producer Ricky Kirshner.

Kirshner has served as the executive producer of the Tony Awards since 2004, the Super Bowl Halftime Show—the most-watched television event of the year—since 2007, and has worked on every Democratic National Convention since 1992.

“Leadership means being able to adapt to any situation. That's exactly what we've done with our convention,” said DNC chair Tom Perez.

“Unlike this president (Trump), Joe Biden and Democrats are committed to protecting the health and safety of the American people,” he said.