My 2-year-old brother died in WWII Leningrad: Putin on how Soviets beat the Nazis

"My father, despite being exempt from duty, volunteered to defend hometown," he wrote 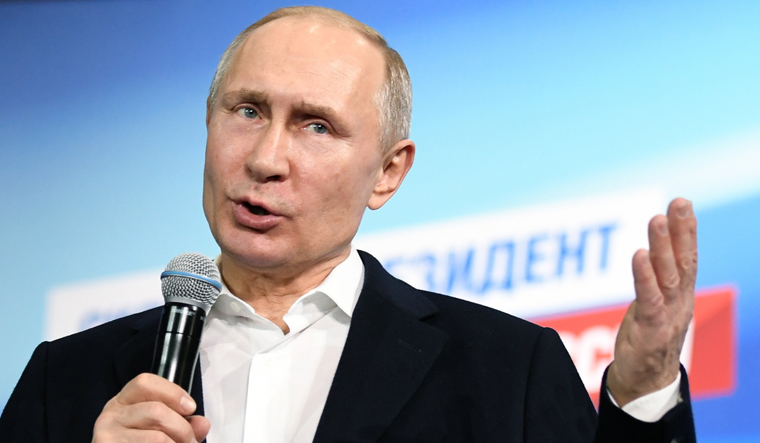 Russian President and Presidential candidate Vladimir Putin speaks during a meeting with supporters at his campaign headquarters in Moscow, Russia | Reuters

In an article in the US-based National Interest magazine, Russian president Vladimir Putin pondered on the after-effects of the Second World War, saying it is essential to pass on to future generations the memory of the fact that the Nazis were defeated first and foremost by the Soviet people. He said that Western powers, acting on self-interest, had forced USSR into the Molotov-Ribbentrop non-aggression pact with Nazi Germany. A week from now, Russia will host a huge military parade in Red Square to commemorate the end of World War II.

The article commences with some personal insights into Putin's losses during the war: "For my parents, the war meant the terrible ordeals of the Siege of Leningrad where my two-year-old brother Vitya died. It was the place where my mother miraculously managed to survive. My father, despite being exempt from active duty, volunteered to defend his hometown. He made the same decision as millions of Soviet citizens. He fought at the Nevsky Pyatachok bridgehead and was severely wounded." In the eastern front of the World War, Hitler's Operation Barbarossa in 1941 (to invade Soviet Union) had miserably failed, courtesy a Soviet counter-offensive, the onset of harsh winter and the sheer vastness of the Soviet landscape.

"Almost 27 million Soviet citizens lost their lives on the fronts, in German prisons, starved to death and were bombed, died in ghettos and furnaces of the Nazi death camps. The USSR lost one in seven of its citizens, the UK lost one in 127, and the USA lost one in 320. Unfortunately, this figure of the Soviet Union's hardest and grievous losses is not exhaustive," he wrote.

He said he was confident that one of the characteristic features of the people of Russia was to fulfill their duty without feeling sorry for themselves when the circumstances demanded, and values as selflessness, patriotism, love for their home, their family and motherland remain fundamental and integral to this day.

He said the role of the USSR was being obfuscated by the Western powers. "Meanness can be deliberate, hypocritical and pretty much intentional as in the situation when declarations commemorating the 75th anniversary of the end of the Second World War mention all participants in the anti-Hitler coalition except for the Soviet Union."

He laid out how the Soviets defeating the Nazis as a feat of incredible courage, effort and dedication. He said the USSR was facing the strongest, most mobilised and skilled army in the world with the industrial, economic and military potential of almost all Europe. "The most serious military defeats in 1941 brought the country to the brink of catastrophe. Combat power and control had to be restored by extreme means, nation-wide mobilisation and intensification of all efforts of the state and the people. In summer 1941, millions of citizens, hundreds of factories and industries began to be evacuated under enemy fire to the east of the country. Within six months, the Soviet people did something that seemed impossible," he said.

At the same time, he called out the Western powers for their duplicity during the time. He said the root cause of Nazi Germany's rise stemmed from the decisions made after the First World War. The Treaty of Versailles (the Allied Powers made Germany sign territorial concessions, disarmament treaties and war reparations) became a symbol of grave injustice for Germany as it basically implied that the country was to be robbed, being forced to pay enormous reparations to the Western allies that drained its economy, Putin wrote.

He said Soviet Union was forced into signing a non-aggression agreement with Germany before the war—the Molotov-Ribbentrop pact—after Western powers cold-shouldered creating a military alliance. The Soviet Union did its utmost to use every chance of creating an anti-Hitler coalition. Despite I will say it again the double dealing on the part of the Western countries, he wrote.