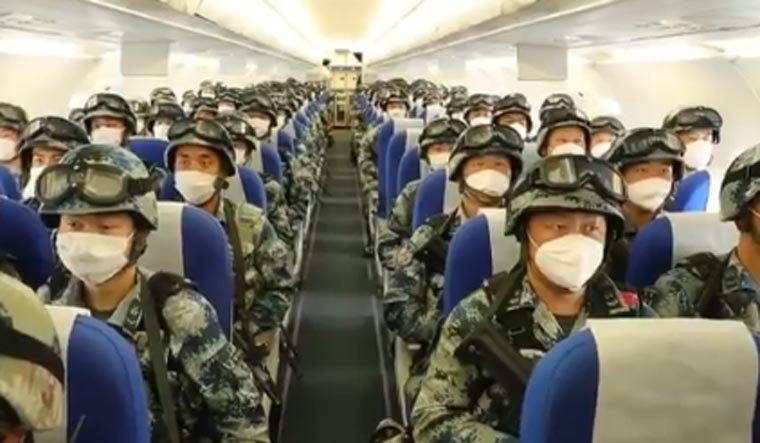 China appears to be continuing to use subtle propaganda about its military might even as it claims that it is attempting to resolve the standoff with India at Ladakh.

Last week, Chinese state-run media highlighted new weapons optimised for high-altitude warfare including two types of helicopters and a light tank. On June 2, state-run Global Times reported that the People's Liberation Army in Tibet "sent troops to a high-altitude region at an elevation of 4,700 meters at night for infiltration exercises behind enemy lines..."

On Saturday, Indian and Chinese military officials held talks to resolve the standoff at Ladakh, but little progress was made. On Sunday, the Global Times reported that that the People's Liberation Army had conducted a "large-scale manoeuvre operation" featuring thousands of troops and armoured vehicles transported over "thousands of kilometres" in "just a few hours" to the "high-altitude northwestern region".

The Global Times claimed the People's Liberation Army used "civilian airlines, logistical transportation channels and railways" to transport personnel from the central province of Hubei to an "undisclosed location" in the plateaus of northwestern China. Provinces in northwestern China include Gansu, Qinghai and Xinjiang, the last of which borders India. China, in fact, calls Aksai Chin part of Xinjiang.

The Global Times also shared a video showing PLA personnel being transported by buses, commercial aircraft and trains. Global Times reported, "Several hundred pieces of military equipment including armoured vehicles and huge batches of supplies were also involved in the operation, which ended successfully in just a few hours."

"This manoeuvre mission saw significant breakthroughs not only in the scale of mobilised troops but also means of transportation. [Using civilian transportation] substantially expanded our means of transporting forces and increased efficiency in manoeuvring an entire organisation of troops," Major Colonel Mao Lei, head of the training department at the airborne brigade, told Chinese media.

While it is difficult to confirm where the troops were transported to, the distance between Hubei and Xinjiang is approximately over 3,000km.

The continued media reports on high-altitude exercises is being perceived as an attempt at projecting a muscular image over the standoff with India.

Interestingly, the Global Times on Monday quoted Chinese experts as saying the standoff over Ladakh "could continue for a little longer", but it would not escalate into a confrontation like 'Doklam'. The confrontation between the PLA and the Indian Army in Doklam in 2017 was the most serious bout of tension between the two countries in decades.

Qian Feng, a senior fellow at the Taihe Institute and director of the research department of the National Strategy Institute at Tsinghua University in Beijing, told Global Times, "the ongoing standoff is not likely to end immediately, as concrete issues must still be resolved." Qian said “The trigger of the event, India's construction of infrastructure on Chinese territory, must be stopped, or China will not accept the situation.”