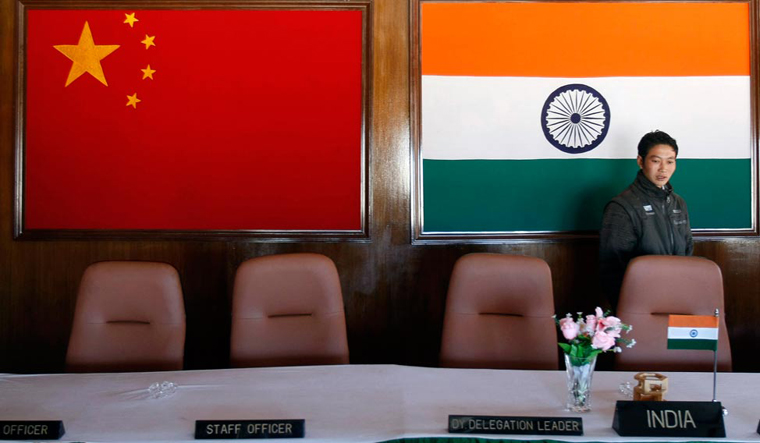 Chinese boundary claim lines defy logic to everyone other than the Chinese Communist Party. Interestingly, the word ‘logic’ is not in the Chinese lexicon: The Chinese term for logic is “luoji”, a term clearly borrowed from English. The emperor draws a line and his ministers intimidate or even go to war to annex whatever territory is within those lines and the Chinese people are forced to believe that these areas were historically a part of China.

Look at the ‘nine-dash Lines’, which were drawn to cover the areas traversed by a Chinese sailor, Zheng He, in the 15th Century, thereby amalgamating the territories into China. Traditionally, geographically and according to international conventions, most of the area belongs to some of the Southeast Asian nations. China has occupied and created a few islands within the 9-dash-lines and has even deployed military forces there. This is despite objections by nations to whom the areas belong, rulings of the International Court of Justice and even freedom of navigation operations by the mighty US and allies. Even offshore oil exploration by Russia and India was not spared.

The logic of the Chinese line is still a delusion, for those outside of it.

The India-China border is another line where China displays consistency in defying logic. A boundary line became necessary in October 1950, when China occupied Tibet and became India’s neighbour. The traditional boundaries that existed between India and Tibet were clearly not logical to China and they proffered a series of lines to India in 1956, 1959 and 1961. The lines kept moving into India and led to the war of 1962.

A few notable events in the period leading to the war were as follows:-

The war led to the Indian realisation of logic (or lack of it) regarding the Chinese lines; a rising nationalistic fervour against China and the rapid expansion of Indian Armed Forces. China now had to live with a strong neighbour, who could not be “taught a lesson” as they had planned. Mao came back to power and was in a position to launch the Cultural Revolution to consolidate his position.

Fast forward to current times and it can be seen that China has been consistent in defying the logic of the lines. After the Border Peace and Tranquility Agreement was signed between India and China in 1993, the process of LAC delineation commenced through Joint Working Groups and Experts Group meeting regularly. In 2002, maps showing each other’s perception of LAC and IB in the Central Sector were exchanged during the Experts Group Meetings. In a subsequent meeting, exchange of maps with the lines of Western Sector was not done as China showed a claim line which was very different from what existed on ground since 1962. Subsequently from 2007, their perception of border in Sikkim, Depsang, Chumar and many other places continued to change and led to the Doklam Crisis in 2017 as the Chinese line extended into Bhutan. The number of Chinese transgressions and patrol face-offs increased considerably during this period. The current face-offs in Sikkim and Ladakh are consistent with this pattern of Chinese intransigence. A few notable events in recent times, comparable to the Mao period are as follows:-

The logic-defying nature of Chinese lines seem to have rubbed off on Nepal too. It is quite likely that even the Nepalese political parties are raising nationalistic fervour on the Kalapani issue at this point of time, based on Chinese coaxing. Even though political stability is at stake, a Nepalese PM is unlikely to use such harsh words against India, while they are fighting COVID-19 and badly need India to buy palm oil and tea from them. Blaming India for the spread of COVID-19 in Nepal is likely to be a leaf out of Chinese books.

The current imbroglio caused by the growing Chinese border lines, will not lead to a war, but will certainly coax India to strengthen the military and form strategic alliances to deal with China more aggressively. The world will also wake up to the Chinese ‘luoji’ of lines.

The author is a retired Major General and a PhD scholar with Madras University,  who was a faculty member at the National Defence College for the last four years.