Trump does a U-turn, supports India’s position on hydroxychloroquine 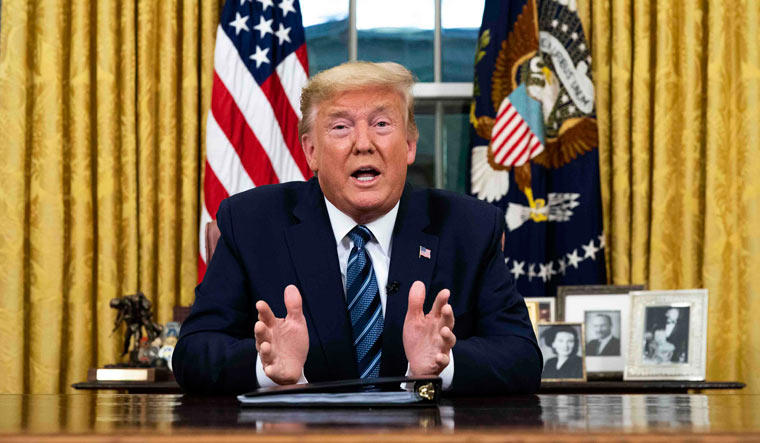 A day after Donald Trump suggested retaliation against India if the Narendra Modi government held back on the supply of hydroxychloroquine, the US president said that the prime minister was helpful and he backed India’s position.

He further ended up praising India’s handling on the COVID-19 pandemic.

In an interview with Fox News, Trump said, “I bought millions of doses. More than 29 million. I spoke to PM Modi, a lot of it comes out of India. I asked him if he would release it? He was great. He was really good. You know they put a stop because they wanted it for India. But there is a lot of good things coming from that.”

“Lot of people looking at it and saying, you know I don't hear bad stories, I hear good stories. And I don't hear anything where it is causing death. So it is not something like... You know we are doing vaccines. Johnson and Johnson, they need to test that. It seems malaria-affected countries are unaffected where it is common,” he said.

PM Modi on Sunday had said that India would ban all exports of the drug “without exception”. A statement from India’s Ministry of External Affairs said that apart from “nations badly affected by the virus” it would supply the drug to neighbouring countries in “appropriate quantities”.

India, on Tuesday, had also called for the depoliticisation of export of key drugs essential for combating COVID-19 right after Trump threatened retaliation if supplies were held back.

Trump, in the meantime, has hit out against World Health Organization (WHO) for being China-centric. He also accused China and WHO of keeping the world in the dark about the epidemic.

“The W.H.O. really blew it. For some reason, funded largely by the United States yet very China-centric. We will be giving that a good look. Fortunately, I rejected their advice on keeping our borders open to China early on. Why did they give us such a faulty recommendation?” he tweeted on Tuesday.

Anurag Srivastava, spokesperson for MEA, said that India had made a comprehensive assessment of possible requirements under different scenarios and confirmed availability of medicines for all possible contingencies. The Directorate General of Foreign Trade said that they lifted restrictions on 14 drugs on Monday.

“With regard to paracetamol and hydroxychloroquine, they will be kept in a licensed category and their demand position would be continuously monitored. However, the stock position could allow our companies to meet the export commitments that they had contracted,” Srivastava said.

How effective is the drug

Hydroxychloroquine is one of the oldest and best-known drugs used for the cure of malaria. Trump said that the Food and Drug Administration (FDA) had approved the drug for treating the coronavirus. The FDA, however, has denied this. The drug is also said to be effective to cure certain auto-immune diseases like lupus and rheumatoid arthritis.

Trump later said that the drug had been cleared for ‘compassionate use’, which meant that the doctor can administer it to a patient if the patient is in a life-threatening condition, but, the drug is yet to be cleared by the government for usage.

India is one of the world’s largest manufacturer of the drug. It can also be bought over the counter in the country and is fairly inexpensive.

Effectiveness of the drug is still being discussed by health experts. Dr Joyeeta Basu, a senior consultant physician in India was quoted in a BBC interview as saying, “If it truly has a dramatic effect on the clinical course of COVID-19 we would already have evidence for that. We don’t, which tells us that hydroxychloroquine if it even works at all, will likely be shown to have modest effects at best.”

As per reports, there have been no complete clinical trials that are important to demonstrate how the drug behaves in a patient. However, trials are being conducted by experts in China, the US and the UK and Spain.

An article in the Lancet medical journal warns that hydroxychloroquine could have dangerous side effects if a carefully controlled dose is not administered.

Currently, the US has more than 370,000 confirmed cases of those infected by the coronavirus and almost 11,000 deaths.