Wet markets have been blamed as the source of the virus 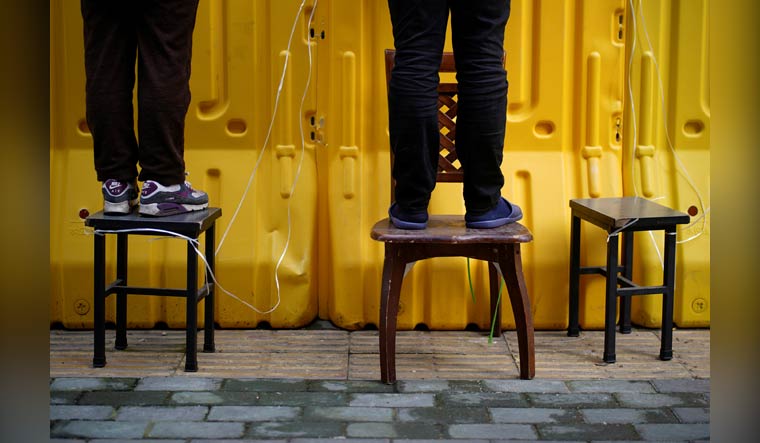 Residents pay for groceries by standing on chairs to peer over barriers set up to ring-fence a wet market on a street in Wuhan, Hubei province, the epicentre of China's coronavirus disease (COVID-19) outbreak, April 1, 2020 | Reuters/Aly Song

The notorious wet markets are selling bats, pangolins and dogs for human consumption.

Scientists say that the move is a dangerous one as the COVID-19 causing coronavirus first lurked in a bat in China and hopped to another animal, before getting passed on to humans. After the virus broke out, the Chinese government, on March 5 banned the consumption of wild animals. The ban, however, was temporary and is expected to be signed into law later this year.

“The markets have gone back to operating in exactly the same way as they did before coronavirus,” a report in The Mail on Sunday read.

The COVID-19 virus was first contracted by a 55-year-old man from Hubei from a similar wet market that had dogs, rabbits and other scared animals cramped in cages.

It has been four months since the outbreak of the virus and there is no vaccination in sight. And even though there have been no domestic transmissions, China has risked fanning the second wave of coronavirus cases. 313 imported cases were reported on Friday.

As on Tuesday, 36 new imported cases were reported in the mainland and around 1,367 asymptomatic cases were under observation.

The reopened markets are under the watchful eyes of guards who are ensuring that no pictures are being taken inside the markets. Residents in Wuhan were seen standing on chairs and stools to peer over fences and make payments and collect their groceries.

On Tuesday, WHO said that the COVID-19 pandemic is far from over in Asia. In an AP report, WHO Regional Director for the Western Pacific, Dr Takeshi Kasai was quoted as saying, “This is going to be a long-term battle and we cannot let down our guard. We need every country to keep responding according to their local situation.”