While Pakistan harped on Kashmir, India aimed to mobilise South Asia against disaster 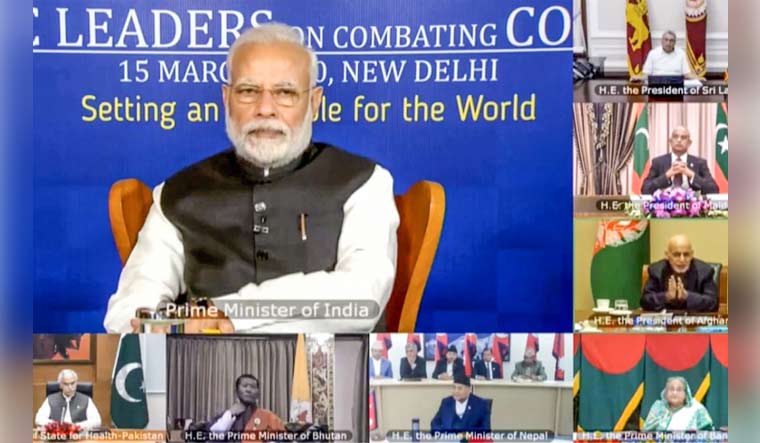 Nepali prime minister K.P. Sharma Oli was just yesterday discharged from hospital after undergoing a renal transplant—but that did not stop him from attending the video conference of SAARC heads that was initiated by Indian prime minister Narendra Modi as a bid to foster regional cooperation against the spread of COVID-19.

For most of the SAARC heads of state, the initiative was welcomed rapidly and with enthusiasm.

Mirza also stood out as the only member of the group who did not thank or appreciate India's initiative in organising this meet to help the region combat a common and totally unprecedented challenge. Pakistan did not even agree to contribute towards the COVID-19 fund (which India proposed and committed an initial corpus of $10 million) even as Afghanistan, with its myriad problems, agreed to contribute.

Some ideas on how SAARC nations can work together to tackle the COVID-19 Novel Coronavirus. pic.twitter.com/b9K8tpPSzr

With Pakistan insisting on its petty and churlish behaviour, is there any future in taking forward regional cooperation against the spread of COVID-19, and possibly revive SAARC itself? Time will tell.

234 Indians stranded in #Iran have arrived in India; including 131 students and 103 pilgrims.
Thank you Ambassador @dhamugaddam and @India_in_Iran team for your efforts. Thank Iranian authorities.

This was managed under extremely challenging situations, given that Iran is overwhelmed by the crisis that has beset it. The Indian embassy in Tehran has converted itself into a humongous facility to test every Indian who wishes to return. A laboratory at the premises takes swabs which are then sent back to India for processing, and only those who test negative are allowed back. The embassy is also catering to the victuals of the Indians coming to the embassy, given the problems within Iran.

India has so far brought back 1,444 nationals—766 from China, 124 from Japan, 336 from Iran and 218 from Italy, and is in the process of further evacuations from Iran and Italy. The evacuation challenges are different in each country; the lockdown in Italy make it difficult to access people, especially in the Milan region of northern Italy.

South Asia has managed to remain relatively outside of COVID-19's assault, with only around 150 cases reported so far across the eight nations. Given the vast region that SAARC covers and the high population density and integration with the rest of the world, this is indeed remarkable.

For contrast, China has reported 80,000 cases since the beginning of the outbreak, while cases in the rest of the world have crossed 65,000.

However, given the current unpredictability of the situation, there is no telling how the virus might spread, and the SAARC initiative was an attempt at developing a regional protocol to deal not just with this pandemic, but future ones too.

While the initiative was Narendra Modi’s brainchild, member nations were quick to respond to India's outreach, confirming their participation within an hour or so of being contacted. India reached out on Friday, the contours of the meeting were finalised by Saturday, and the hour-and-a-half-long session was successfully conducted on Sunday evening. The SAARC video call has proved an unprecedented and timely initiative.

The threat continues to loom large. Afghan President Ashraf Ghani pointed out the long border his country shares with Iran. There are several pilgrims from the region who were, or are, in Iran. While India has been very stringent with the screening of people entering, the same cannot be said for other countries, sources reveal. There is intelligence to show that around 3,700 pilgrims returned from Iran to Pakistan in recent days, many of whom live in camps in the Baloch region. With the lax screening, how many could be infected is anyone's guess. India has closed all borders with Pakistan.

India sent a Rapid Response Team (RRT) to Male within hours of the country requesting help. Officials say that the team does not just comprise experts, but also sophisticated equipment for testing and screening people. India has the wherewithal to rustle up several such RRTs within a short notice and is willing to extend its help and expertise to other countries. It is learnt that several nations have approached India for help at various levels.

India's success in staying relatively unscathed by COVID-19's virulence has been because of the early, extreme and thorough measures that it took. India was among the first nations to cancel visas from China and Japan, a measure that was considered extreme by many. Sources point out how Italy had initially cancelled visas from China initially before going back on the decision—and now reels under the pandemic's wrath.

Still, there are allegations that the number of reported cases in SAARC may be low because many cases might have gone undetected. Government officials, however, point out that as far as India is concerned, they are confident about their figures. A senior official said that apart from the centre, states themselves have been very proactive in contact tracing, handling positive cases and screening people. Whether it is Manipur or Kerala or Uttar Pradesh, officials have been thorough.