OPINION: With impeachment in sight, is Trump confident or desperate? 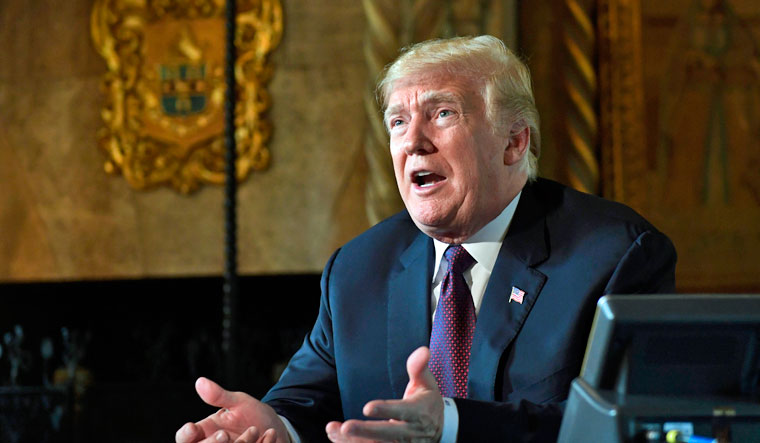 US President Donald Trump's attitude in the run-up to a historic impeachment leaves many questions open over his mood ahead of a crucial vote in the House of Representatives.

Last night, the president wrote a letter to House Speaker Nancy Pelosi, asking her to stop the impeachment, just as the House readies itself to vote on Wednesday evening.

In all likelihood, this is what will happen: Most House Democrats will vote to remove Donald Trump from office. Then, the Senate will move to acquit him in early 2020; both because of its Republican majority and its history with the last two impeachments— Andrew Johnson in 1868 and that of Bill Clinton in 1999.

So why the drama with sporadic tweets calling the impeachment a witch hunt and tweeting various statements that support his cause?

Can you believe that I will be impeached today by the Radical Left, Do Nothing Democrats, AND I DID NOTHING WRONG! A terrible Thing. Read the Transcripts. This should never happen to another President again. Say a PRAYER!

“They want to Impeach me (I’m not worried!), and yet they were all breaking the law in so many ways. How can they do that and yet impeach a very successful (Economy Plus) President of the United States, who has done nothing wrong? These people are Crazy!”

“This is an impeachment with no crime and with no direct evidence. Why are @RepAdamSchiff, @RepJerryNadler, and @SpeakerPelosi getting off the hook when they said impeachment had to be bipartisan and that there had to be compelling evidence? This impeachment has neither,” Representative Matt Gaetz and the President retweeted the same.

On December 14, Trump tweeted, "It's not fair that I'm being Impeached when I've done absolutely nothing wrong! The Radical Left, Do Nothing Democrats have become the Party of Hate. They are so bad for our Country!".

One could say that the move is classic Trump, par for the course of a presidency that has seen explosive statements become commonplace, especially prior to a key election.

But, this is unlikely to just be about raking in sympathy votes because popularity polls show that Trump, despite the impeachment proceedings, has not lost popularity among his supporters.

According to a study released by USA Today, Trump's popularity is at 44 per cent. In a Quinnipiac poll, 73 per cent said the economy fared well under Trump administration, with 95 per cent of Republicans opposing removing Trump from the office.

He really does not need to fear votes swaying owing to the impeachment process. Hard-core Trump supporters or Republicans will vote for him next year too—an outcome of the shrinking space for moderates or centrists as we know it.

The last three years of the Trump administration have been marked by polarisation; be it regarding gun control, immigration, abortion laws or the political space as a whole. The decline of the middle ground is evident—The Wall Street Journal published statistics that showed around 22 per cent of the US population in 2018 were conservative moderates as compared to 35 per cent in 2001.

If President Trump feels that he is exuding power with statements or tweets as these, he is mistaken—it rather showcases weakness and insecurity. But, votes will still fall in line for the party, if not for Trump.

Another way to look at the Trump rants is to see them as acts of a braggart, accustomed to creating soundbites that boost his celebrity quotient. Whether as a business tycoon, playboy, or reality TV star—Trump has enjoyed the public profile that comes with his persona.

No matter how much he insists that the impeachment does not scare him, some of his rants suggest actual fear.

Trump has, after all, been diagnosed as a narcissist by no less than 27 psychologists in the book, The Dangerous Case of Donald Trump. So neither pride or insecurity cannot be ruled out.

Whatever the case might be, neither impeachment nor acquittal will put an end to Trumpisms making their way through social media.