Muslims in Kashmir, Assam 1 step away from extermination: Genocide researcher 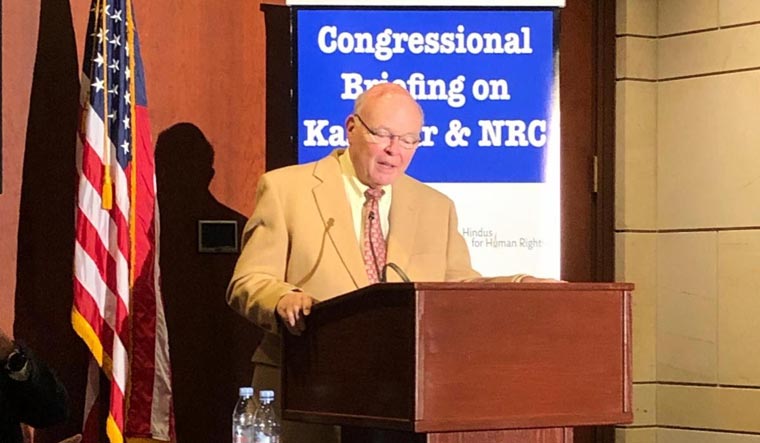 Those who have ever used a social media platform would have inevitably come across a graphic about genocide in posts related to conflict zones and areas of social strife. This graphic, '10 stages of Genocide' (some versions have eight stages), describes mass ethnic killing as a process consisting of predictable stages. The classification on the stages of genocide was first created by a US professor, Gregory Stanton, when he worked at the US State Department in 1996 during the time of the genocide in Rwanda.

On Thursday, Stanton, who is president of the organisation Genocide Watch, claimed “Muslims in Kashmir and Assam” were just one step away from extermination.

Stanton made the statement at a briefing to the US Congress on Kashmir and the NRC, organised by the Indian American Muslim Council, Emgage Action and Hindus for Human Rights. While the Indian American Muslim Council and Emgage Action work for human rights for Muslims, Hindus for Human Rights claims to be a US-based advocacy organisation “committed to the ideals of multi-religious pluralism in the United States, India and beyond”.

According to a press release on the briefing from the Indian American Muslim Council, Stanton claimed, “Preparation for a genocide is definitely under way in India.” He explained, “The persecution of Muslims in Assam and Kashmir is the stage just before genocide. The next stage is extermination—that’s what we call a genocide.”

Stanton alleged Assam was seeing the “construction of a pretext for expulsion [of Muslims]”. He argued the issues in both Kashmir and Assam were a “classic case”, following the pattern of the 10 stages of genocide.

Elaborating on the stages, Stanton was quoted by the Indian American Muslim Council as saying “The first stage was 'classification' of us versus them. The second stage, 'symbolisation', named the victims as foreigner. The third stage, 'discrimination', classified [the victims] out of the group accepted for citizenship, so that they had no human rights or civil rights of citizens and were discriminated against legally. The fourth stage, 'dehumanisation', is when the genocidal spiral begins to go downwards. You classify the others as somehow worse than you. You give them names like terrorists, or even names of animals, start referring to them as a cancer in the body politic; you talk about them as a disease that must be somehow dealt with.”

“The fifth stage was creating an 'organisation' to commit the genocide: The role played by the Indian Army in Kashmir and the census takers in Assam. The sixth stage was 'polarisation', which is achieved by propaganda. The seventh stage was 'preparation', and the eighth 'persecution', where Assam and Kashmir currently were. After the ninth stage of 'extermination', comes the tenth stage of 'denial'.”

Stanton declared the regime of Prime Minister Narendra Modi had “all the hallmarks of an incipient Nazi regime”, adding “nationalism taken to its extreme is fascism and Nazism”.

The briefing also saw participation by Indian activist Teesta Seetalvad, a trenchant critic of Modi's policies. Speaking via videoconference, Seetalvad alleged the NRC had discriminated against Muslims and was “being used to subvert human rights in Assam”.

Seetalvad charged, the “NRC was used to pit lingual communities against each other and creating fissures between different castes… A frenzy is being whipped up in West Bengal, Meghalaya and other states to disturb the peace and create unrest.”