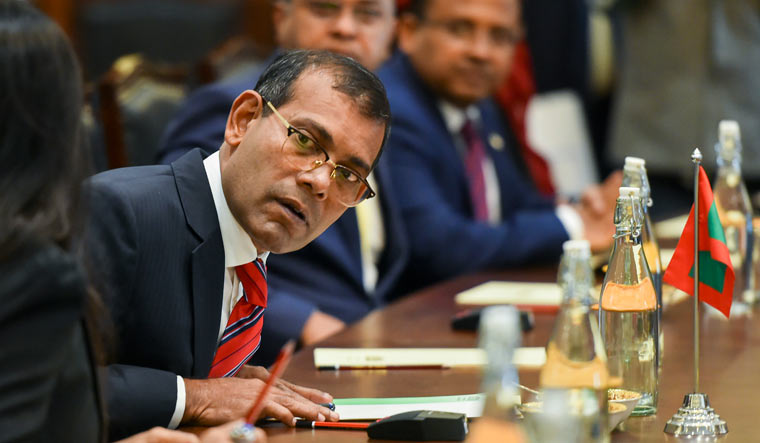 Maldives owes China a whopping 3.5 billion dollars in loans, said Mohamed Nasheed, speaker of the People's Majlis of Maldives, noting that unless South Asia was careful, China would become the new imperial power. "Already, without firing a single shot, it (China) has grabbed more land than the East India company did. South Asia should not go the way it did in the 18th century."

Nasheed, who is in India for the first time in his present capacity, met Prime Minister Narendra Modi and External Affairs Minister S. Jaishankar earlier today.

He, however, said that the country would pay back its loans though it would be a huge challenge. He felt such loans were not developmental assistance, specially since the cost of projects were inflated. He gave the example of a project to construct seven thousand flats which was cleared in the previous regime.

"It was extremely expensive, but we couldn't stop the project halfway as it would become an even bigger white elephant. But we have many such assets now where the yields haven't happened."

Nasheed said that the Chinese debt trap wasn't just an economic issue but also a human rights one. It's also an issue of sovereignty and freedom, he alleged, saying he would raise it at every platform, though the Chinese authorities called him a liar.

Speaking about the Indian financial assistance of line of credit of one billion dollars, he said the process needed to be expedited.

He also added that the Free Trade Agreement which the previous Yameen government had agreed to with China couldn't possible go ahead. "We have no trade balance with China. How can an FTA be in our favour then?" he said, adding that the FTA would not proceed in the parliament.