US diplomats in Ukraine had pushed for investigating Biden 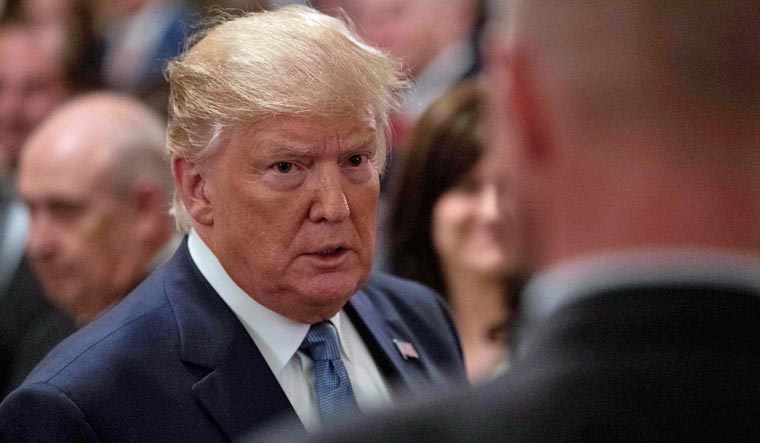 The drama around Trump's impeachment inquiry just got a boost. The president, last night said he would 'certainly' consider asking Chinese leader Xi Jinping to investigate his probable opponent for 2020 elections, Joe Biden.

Publicly egging on China, Trump seeks to implicate Biden and his son in the kind of corruption that has long plagued Ukraine. Hunter Biden served on the board of a Ukrainian gas company at the same time his father was leading the Obama administration's diplomatic dealings with Kyiv.

And since there has been no proof of wrongdoing by either the former vice president or his son, Timing of the investigation has raised concerns among anti-corruption advocates.

A top US diplomat in Ukraine in the meantime thought it was “crazy” to withhold military aid for the country as it confronted Russian aggression, according to evidence presented on Thursday in an impeachment probe of President Giuliani, who played a major part in the administration's dealing with Kyiv.

Trump's Republican aides in a bid to turn the tables on the impeachment inquiry had said that the president was the real whistleblower, who is seeking to expose Joe Biden's son for corruption.

And now, according to a cache of text messages released on Thursday, top US diplomats encouraged Ukraine's newly elected president Vlodyrmyr Zelensky to investigate Joe Biden's family in return for a potentially high-profile visit to Washington with President Donald Trump.

The texts provide the first insider account of last summer's negotiations between Washington and Kyiv. In the several pages of messages released by the Democratic leaders of the committees, US diplomats discussed setting up the July 25 telephone call between Trump and Ukrainian President

Volodymyr Zelenskiy that has been central to Trump's impeachment investigation.

"I think it's crazy to withhold security assistance for help with a political campaign," William Taylor, the US charge d'affaires in the Ukrainian capital said.

Sondland responded that he believed Taylor was wrong about Trump's intentions, saying Trump had wanted to withhold the aid over concerns about corruption in Ukraine.

As communication between the diplomats progressed full-steam, Sondland indicated that Trump "really wants the deliverable," referring to the investigation to be made by Ukraine. Volker and the two other diplomats _ William Bill Taylor, the charge d'affaires at the US embassy in Ukraine, and Gordon Sondland, the US ambassador to the European Union _ discussed the statement Zelenskiy would issue in support of the investigation.

Text messages show that within a month of the call, Trump cancelled the visit with Zelenskiy, sending the diplomats into a scramble as they try to salvage a meeting with Vice President Mike Pence or possibly Secretary of State Mike Pompeo. After that, he also put a hold on military assistance to Ukraine, which was depending on the funds as part of its defence of Russia.

One of the diplomats, Yermak suggested several dates when Trump and Zerenskiy could meet in September.

The messages convey a distinct campaign among the three diplomats, who, against some of their stated better judgement appear to be trying to help Ukraine reset its relationship with Trump by pushing his interest in investigating his Democratic rival.

In a text message by Volker on the morning of a planned July 25 phone call between Trump and President Volodymyr Zelenskiy, wrote: Heard from White House Assuming President Z convinces Trump he will investigate / "get to the bottom of what happened" in 2016, we will nail down a date for visit to Washington.

House Democrats launched the impeachment inquiry over the Ukraine matter after a government whistleblower disclosed Trump's call with Zelenskiy and the push to have a foreign government interfere in US elections.

Trump and his lawyer Rudy Giuliani have tried, without evidence, to implicate Biden and his son Hunter in the kind of corruption that has long plagued Ukraine.

Ukraine was also asked to investigate Burisma, a Ukrainian gas company where Joe Biden's son Hunter served on the board. However, most of the planning fell apart and Zelenskiy's aide was not able to lock a date for Ukraine's president to meet Trump.

But all that planning started to unravel when Zelenskiy's aide tried to lock in a date for the Trump meeting before putting out the statement on the investigations.

Trump and Giuliani have also promoted an alternative theory of 2016 election interference, which puts Ukraine, not Russia, at the centre, at odds with the 2017 findings of the US intelligence community and special counsel Robert Mueller's 2019 report.

Trump also said that his call with Zelenskiy was perfect and portrays the impeachment enquiry as a sham.