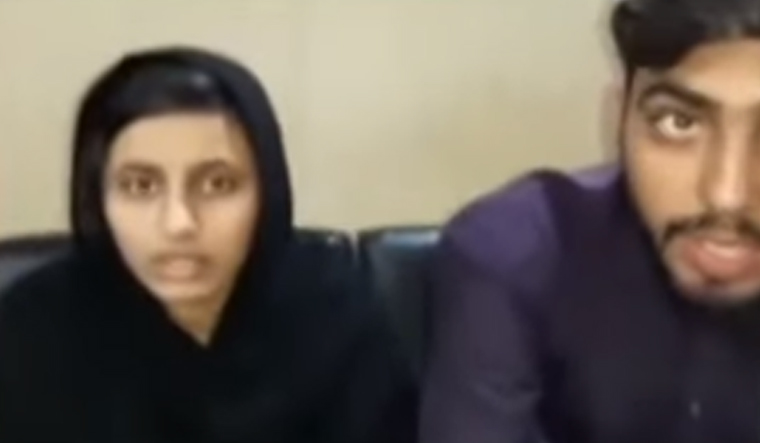 The issue of the teenage Sikh girl, who was allegedly abducted and converted to Islam before being married to a Muslim man in Pakistan's Punjab province, has been "amicably" resolved between the two families, Provincial Governor Chaudhry Muhammad Sarwar has claimed.

The issue snowballed into a controversy after the family of the girl, Jagjit Kaur, in a video message that went viral on Friday, claimed that she was abducted and forcibly converted to Islam. Her family says she is 18 years of age.

An FIR was registered against six people in the case and one of the suspects named Arsalan, a friend of the prime accused Mohammad Hassan who married the Sikh girl, was arrested.

However, the girl, who is the daughter of a Sikh priest in Nankana Sahib, some 80 kms from Lahore, has maintained that she married Hassan of her locality with her own free will. She was shifted to Darul Aman (shelter home) on a court order.

The girl had on Saturday also rejected Sarwar's plea to return to her family citing threat to her life.

In a video tweet on Tuesday, Sarwar, along with the fathers of both Kaur and Hassan, said that the issue has been amicably resolved to the satisfaction of the families concerned.

He thanked both the families for coming to the Governor's House on his request.

Great news for Pakistani and Sikh communities across the world. Issue of Nankana girl was amicably resolved to the satisfaction of the concerned families. The girl is safe and in touch with her family. We shall continue to ensure the rights of minorities in Pakistan, the governor in the tweet.

Sarwar also requested Hassan's father to speak in the video.

We withdraw from the case and we will have no objection if the girl, Jagjit, goes with her family, Hassan's father said.

However, Kaur's father and brother did not speak.

The girl could not be produced before a special judicial magistrate on Monday due to security issues.

The Lahore High Court on Monday granted protective bail to Hassaan till September 7.

Hassan's counsel told the court that the FIR against him and others was lodged by the girl's family under pressure as she married him with her own free will.

"Kaur embraced Islam without any coercion and was given Muslim name Ayesha before nikah (marriage) of the couple was solemnized. She has already recorded her statement before a judicial magistrate concerned denying the charges of abduction and forced conversion to Islam," he said.

The police also detained 10 relatives and friends of Hassan on Saturday in connection with the case.

There are reports that after the agreement between the two families at the Governor's House, the police have set free the detained relatives and friends.