Would China risk another Tiananmen in Hong Kong?

Clashes between the demonstrators and police have turned increasingly violent 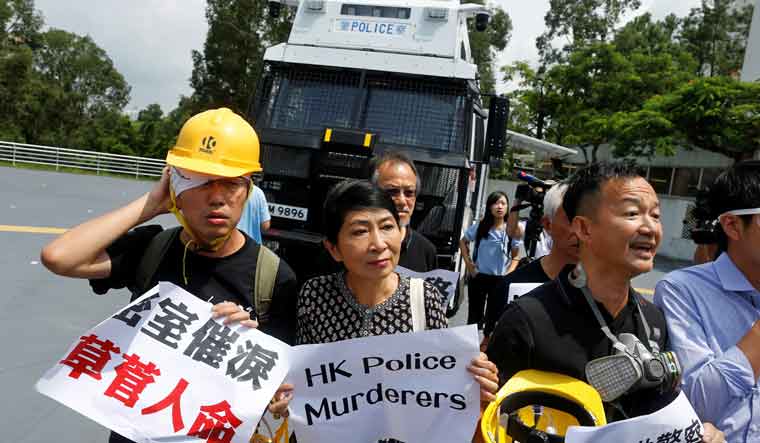 More violence breaks out in Hong Kong as police fired tear gas and beat demonstrators. Protests in the city continued for 10 weeks in a row. The situation sparks fear of another Tiananmen-like crackdown.

Analysts say the potentially catastrophic economic and political consequences will deter Beijing from any overt boots-on-the-ground intervention. Two petrol bombs were thrown, causing fires on the streets while tear gas volleys caused many protesters to flee.

Clashes between pro-democracy demonstrators and police in the former British colony have grown increasingly violent, Beijing's condemnation has become more ominous, with warnings that those who play with fire will "perish by it".

An anti-riot drill was carried out, where, soldiers with assault rifles, armoured personnel carriers and water cannons disperse a crowd of protesters.

"Beijing wants to use the threat of sending in the PLA, or other direct intervention, to try to scare off the protesters," said Ben Bland, a research fellow at the Lowy Institute in Sydney.

"But given the high level of operational risk — and the reputational and economic risks to China — sending in the PLA would be a dangerous move," Bland said.

Pro-democracy protestors who want the city's chief executive to step down rallied Victoria Park with banners that read "Give Hong Kong back to us".

China's brutal 1989 crackdown on pro-democracy protests in Beijing's Tiananmen Square resulted in two years of economic near-stagnation as the country became an international pariah. A similar intervention in Hong Kong could prove to be more severe.

Protesters were blocking traffic as they took to the streets and chanted "Liberate Hong Kong, revolution of our time." The battle with the extradition rule may be won, but the war for democracy now needs to go on and that's the reason Hong Kongers have not stopped protesting.

Stability of the international financial hub is crucial to China's economic well-being, and images of Chinese troops on the streets being broadcast around the world do not send out a good message.

It would also have a major impact on Beijing's ambitions to reunify the mainland with the democratically-governed island of Taiwan. For the moment, China voiced its total support for the Hong Kong police force.

The one country two systems provision will end in 2047 when Hong Kong will lose its special status and Hong Kongers fear that they will be subject to repressive Beijing regime soon after. As per Hong Kong law, PLA troops stationed here cannot interfere in local affairs. It does allow for their deployment at the request of the Hong Kong government to "maintain public order".

And security experts note that in the 30 years since Tiananmen, China has developed a sophisticated security control apparatus that allows far more options for quelling unrest than simply sending in the tanks.

According to analyst Wu Qiang, a former politics lecturer at Tsinghua University in Beijing, China learned its lessons from the 1989 crackdown as it conducted numerous "exchanges" with police forces in Europe and the United States.

"A large part of this was exchanges on how to deal with political riots and peaceful protests," Wu said.

China might just win this war, but it will make the protesters even more radical, pushing them towards more violence. The protesters seem keen to send across the message that when no avenue for political participation is available, other means of expression must be found.

And even if it was able to carry off a non-lethal intervention, the optics of Chinese forces in the streets of Hong Kong in any capacity would still provoke near-global concern and outrage.

Political analyst Willy Lam, from the Chinese University of Hong Kong, suggested Beijing could consider a more covert method of sending its troops or police in.

"They will be wearing Hong Kong Police uniform so it won't be a formal deployment," Lam said.

There are rumours that such an exercise is underway, leading the Hong Kong Police to issue a statement last week flatly rejecting "allegations" of mainland reinforcements among their ranks. One of the leaders of the 1989 Tiananmen protests, Wu'er Kaixi said, "I believe they have learned the lesson that the price of using the military is very high," he said from Taiwan, where he now lives.

In 2014, when Hong Kong citizens staged protests for universal suffrage, it was only partially successful, in the sense, all citizens could vote, but Beijing could reject a candidate standing for the post of the chief executive if they did not find him/her suitable. The current protests, therefore, needn't be entirely futile. Could things change radically? It is too early to tell.