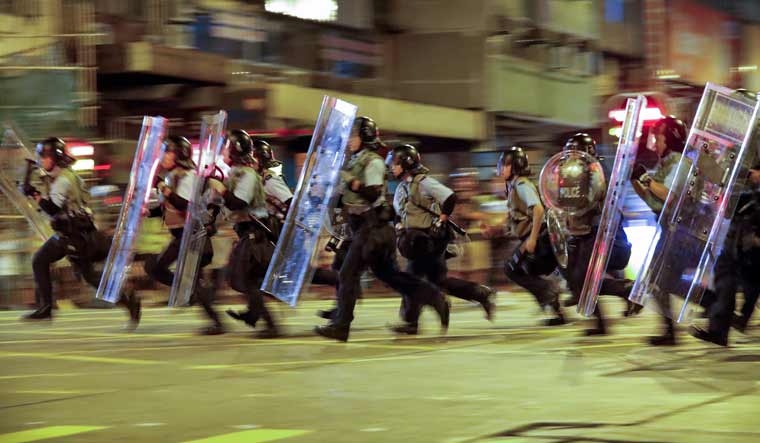 Hong Kongers are now quite used to tear gas canisters and rubber bullets, so used to it, that infact, protesters are ow wearing heat-proof gloves to remove it from the crowd. The protests in the city have reached week nine now. Violence has intensified, turmoil increasing. The very fabric of Hong Kong is unravelling, as demonstrators form special "units" in charge of tackling tear gas, which leap into action as soon as a canister is fired.

Canisters are sometimes picked up and lobbed back at police or extinguished straight away with water bottles. "Some carry traffic cones, which can be popped on top of canisters to contain the gas before protesters douse them with water," said a protester.

Other arsenal must-haves are heat-resistant gloves, so they can pick up searingly hot canisters, and respirators.

"After police fired tear gas at protesters hurling bottles and bricks on Monday, one bystander gasped and rubbed his eyes, attracting the attention of a passing demonstrator who handed him a mask. “This one's not the good one but it will work," said a commenter. The police, in order to curb the protesters, have ramped up use of crowd control measures and protesters have been responding accordingly.

"They're becoming in a sense, an organised army, which they certainly weren't in the first phase," said Tony Davis, a Bangkok-based security analyst with IHS Jane's.

Protesters have been wrapping their arms and legs in cling wrap to prevent the painful skin irritations that the gas and pepper spray can cause. Some even carry saline water to rinse out their eyes.

They might be an “army”, but their equipment is mostly improvised, with one recent tool of choice coming straight from the kitchen. Its use during the Occupy Central blockade of city streets in 2014, the city's last period of civil unrest, caused widespread outrage. "