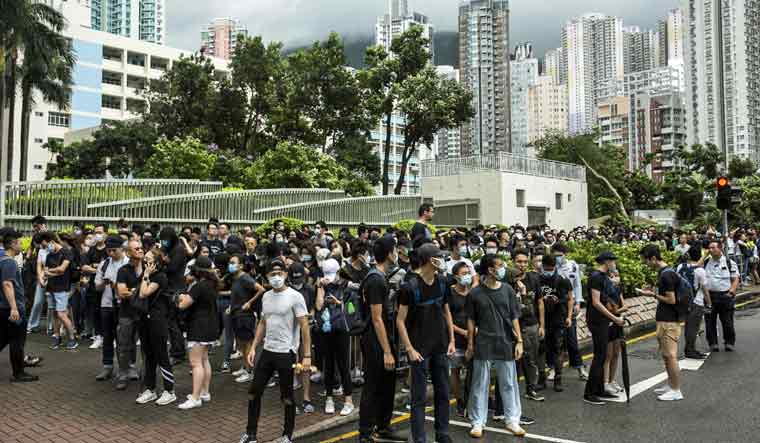 For the first time since the protests over the extradition bill began in June, Commander of People’s Liberation Army’s Hong Kong garrison commented on the Hong Kong situation. The three-minute video of anti-riot drills, made it clear that violent clashes will not tolerated. The video, posted to social media on Wednesday by the Chinese People's Liberation Army (PLA) garrison in Hong Kong, has a caption in which the military declares it has the "confidence" and "capabilities" to maintain security in the semi-autonomous southern Chinese city.

The video also shows a drill of armed troops to the protesters. The video was a thinly veiled warning to the city's pro-democracy movement.

"All consequences are at your own risk," a soldier yells into a loudspeaker at the start of the drill in Cantonese, the language spoken in Hong Kong rather than the Mandarin of mainland China.

An officer is also seen holding a red flag that reads: "Warning, stop charging or we use force".

The release of the video came on the same day dozens of people appeared in court in Hong Kong after being charged with "rioting" for their alleged involvement in an anti-government protest over the weekend.

The unrest that began nearly two months has evolved into a powerful movement for democratic reforms and an end to eroding freedoms, in the most significant challenge to Beijing's rule since the city's handover from Britain in 1997.

Beijing had largely left the city's government to deal with the unrest.

"No civilised society or rule of law society will tolerate rampant violence," the spokesman, Yang Guang, told reporters in Beijing. Thousands of PLA troops have been based at the Hong Kong garrison since the handover.