'Hong Kong, J&K similar; there are lessons to learn'

Although time and distance, history and geography would appear to separate Hong Kong and Jammu and Kashmir into different compartments, a close look at the simmering turbulence in the two disturbed regions would appear to indicate not only interesting parallels but also important lessons to be learned.

When the expiry of the 99-year lease of Hong Kong to the British was in the offing, Deng Xiaoping and Margaret Thatcher initiated negotiations in September 1982 that led to the Sino-British joint declaration of September 18, 1984. It established the sovereignty of the People’s Republic of China (PRC) over Hong Kong when the lease expired in July 1997, simultaneously set up the Hong Kong Special Administrative Area (HKSAR) which would “enjoy a high degree of autonomy, except in foreign and defence affairs”. Thus came into being the “one nation, two systems” arrangement under which China has been exercising sovereignty over Hong Kong, but with HKSAR being “vested with executive, legislative and independent judicial power, including financial jurisdiction”. 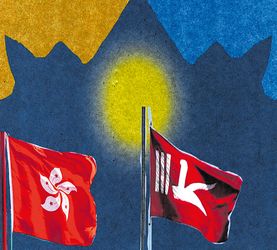 The parallel with the provisions of the Instrument of Accession of J&K to India on October 26, 1947, are striking. As in the case of the Sino-British Joint Declaration of 1984, the Instrument of Accession cedes “direct authority” over J&K to the Indian government but limits the legislative domain of the Central government to the four matters specified in the schedule: defence, external affairs, communications and ancillary.

Even as J&K grievances against Delhi are founded on allegations of the “erosion” of J&K autonomy guaranteed under the solemn agreements, constitutional provisions and legislation, leading to deepening alienation and repeated demonstrations (overlaid by insurgency) in J&K, so also in Hong Kong have departures from the Sino-British joint declaration and attempts to undermine HKSAR’s autonomous jurisdiction resulted in growing alienation, massive street demonstrations, and even some violence to save what remains of HKSAR’s freedoms and rights.

Indian readers are familiar with the intensity and extent of protest in the valley. They are now learning of the 79-day Umbrella Movement in the autumn of 2014 that erupted in Hong Kong in the wake of Wu Bangguo, chairman of the Chinese National People’s Congress Standing Committee, disavowing the continuing validity of the Sino-British Joint Declaration while claiming that Hong Kong’s autonomy was only because “the central government had chosen to authorise the autonomy”. In July 2017, official spokesman Lu Kang, went further to clarify that in the Chinese view the Joint Declaration is “a historical document that no longer has any practical significance”. This departure in policy was manifested in the Beijing-appointed Hong Kong Chief Executive’s decision earlier this year to bring in legislation that would compulsorily extradite Chinese dissidents taking refuge in Hong Kong to the mainland.

Viewing this as the thin edge of the wedge to the dismantling of Hong Kong’s special status, and as an existential threat to “our system and our values”, 12,000 Hong Kongers came out on the streets in March 2019. Angry demonstrators grew exponentially to a million on June 9, and nearly two million on June 16—even though Carrie Lam, Hong Kong’s Beijing-appointed chief executive (chief minister) had withdrawn the extradition bill the previous day to appease protesters.

Should Modi-Shah, in their present mood of triumphalism, attempt to repudiate Article 370 or 35A, J&K will make the Hong Kong protests look like a picnic. The nation stands warned.