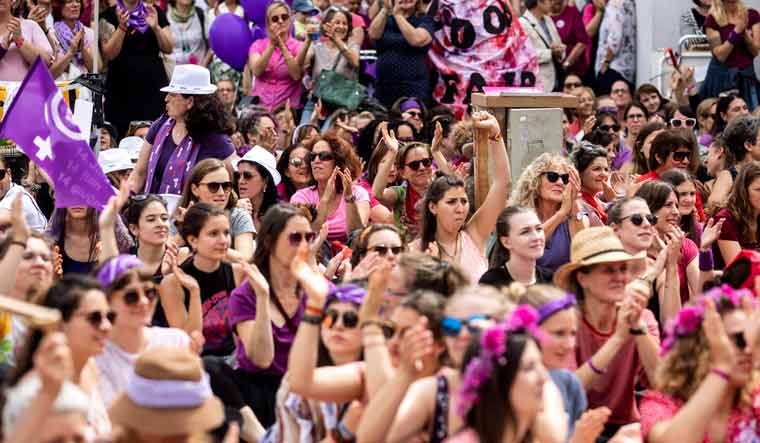 Women across Switzerland, discontent over sexism and workplace inequality are walking off jobs, burning bras and staging other demonstrations. They are demanding more time, respect, pay, equality and end to sexual harassment and violence. This is first such protest in the country in 28 years.

Protesters are also demanding higher pay for domestic workers, teachers and caregivers — jobs typically held more by women. According to analysts, the nation has a poor record on issues like wage gap despite its wealth. Women in the country gained the right to vote only in 1971, which is much later in comparison to neighbouring country of Austria that granted universal suffrage in 1918. Women in Switzerland however needed permission from their husbands to work or open a bank account till 1985 and paid maternity law was made into law only in 2005.

Hundreds rallied at Laussane's cathedral and marched downtown to set wooden pallets on fire and throwing items like neckties and bras into the fire. More planned events include pram matches and whistle concerts to extended lunch breaks and giant picnics.

Groups organising the protests and unions hope to see a 'purple wave', the colour adopted a movement whose main logo is a clenched fist inside a cross and circle Venus symbol.

The protest also encouraged those taking part to avoid store purchases or going to restaurants, to ratchet up the economic impact.

Women are also being encouraged to leave their workplaces at 3:24 pm (local time). According to organisers that is the time when women should stop working to earn as much as men proportionately by average hourly wage. The wage gap remains at 8 per cent for women with equal qualifications doing similar work.

It was in 1991 that Switzerland saw a similar protest took place, on persistent inequalities,10 years after equality between the sexes was enshrined in the Swiss constitution.