Voting under way in Indonesia in its biggest-ever election

Presidency, legislative and local polls are being held on same day for the first time 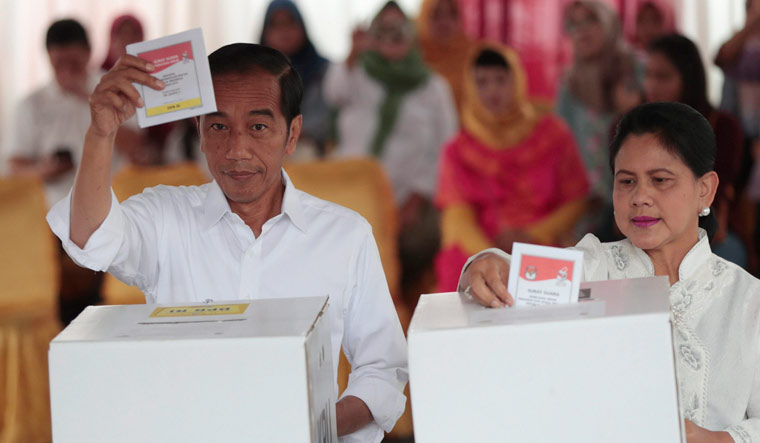 Indonesians are voting in one of the world's biggest one-day elections as the country goes to presidential and parliamentary polls on Wednesday. President Joko Widodo is being pitted against ex-general Prabowo Subianto in the presidential elections.

Voting began shortly after 7 am local time in Papua in Indonesia's easternmost province and slated to end at 1 pm in Sumatra. According to reports, more than 190 million Indonesians will be casting their votes across 800,000 polling stations.

President Widodo is standing for re-election against Subianto, whom he narrowly defeated in 2014.

A former furniture salesman, Widodo launched his political career as a small-city mayor. Widodo is the clear favourite to win the presidential elections.

Most opinion polls show Widodo to win with a double-digit lead. The opposition, however, has stated that if Subianto loses, the results will be challenged over data irregularities in voters' list. After his loss in the 2014 elections, Subianto had unsuccessfully challenged the results.

Elections for the presidency and parliamentary seats to local positions all are being held on the same day for the first time and around 2,45,000 candidates are running.

Widodo's campaign drive focuses on improving infrastructure and tackle poverty across Indonesia. Among the issues and criticism the president has had to face so far are his choice of conservative cleric Ma'ruf Amin as his running mate that could jeopardise his status as a moderate Muslim.

Smear campaigns and fake news have also accused him of being anti-Islam or a communist, something that would spell trouble in the Muslim-majority country. There is also a spike in discriminatory attacks on religious and other minorities reported in the country that could dent Widodo's campaign.

Subianto, on the other hand, has courted Islamic hardliners and has even mirrored US President Donald Trump in his campaigns, calling for “Indonesia first”. His strong ties to the Suharto dictatorship, which collapsed in 1998, has posed a challenge during his campaign to run for presidency. Suharto served as the second president of Indonesia, holding the office for 31 years, and was widely regarded as a dictator.

Subianto has also been accused of committing atrocities in East Timor.