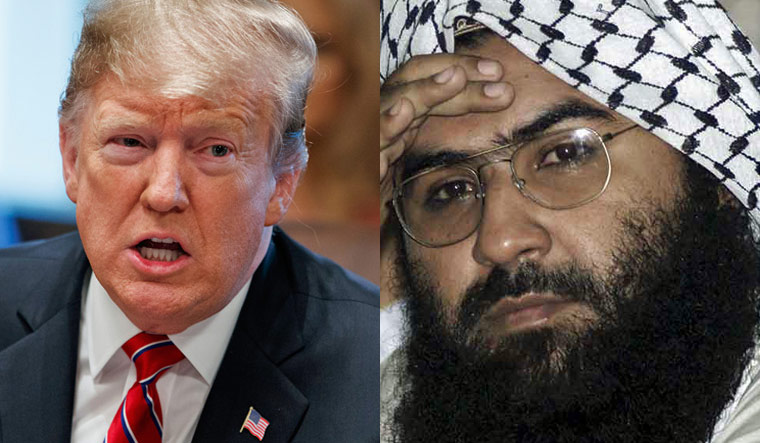 In a stern message to Pakistan, the White House has asked Islamabad to "immediately end" its "support" to all terror groups and not to provide "safe haven" to them, as the US strongly condemned the deadly Pulwama terror attack.

Pakistan-based Jaish-e-Mohammad (JeM) has claimed responsibility for the terror attack in Jammu and Kashmir's Pulwama district on Thursday that left at least 40 CRPF soldiers dead and five others critically wounded.

"The United States calls on Pakistan to end immediately the support and safe haven provided to all terrorist groups operating on its soil, whose only goal is to sow chaos, violence, and terror in the region," White House Press Secretary Sarah Sanders said in a late night statement on Thursday.

"This attack only strengthens our resolve to bolster counterterrorism cooperation and coordination between the United States and India," she said in a strongly-worded statement issued by the White House.

Sanders said the United States condemns in the strongest terms the heinous terrorist attack in Pulwama by a Pakistan-based terrorist group.

"We express our deep condolences to the victims' families, the Indian government, and the Indian people for the loss of life in this brutal attack," said the Press Secretary of President Donald Trump.

Several US lawmakers also expressed solidarity with India in the wake of a dastardly terror attack and said the two countries stand united in condemning and defeating terror.

Cutting across party lines, over 50 Congressmen and Senators took to social media to express their solidarity with the people of India and called for strict action against the JeM terror outfit and its state sponsors.

"I strongly condemn the terror attack in Kashmir. The United States stands with our friends in India, and I send heartfelt condolences to the families that lost loved ones," top Democratic Senator Chuck Schumer tweeted.

Republican Senator Johnny Isakson strongly criticised the terror strike and pledged the US' support to India in defeating terrorism.

Democratic Congressman Eliot Engel, the chairman of the House Foreign Affairs Committee, said countries must not allow terrorist groups like JeM to operate with impunity.

At least 40 Central Reserve Police Force (CRPF) personnel were killed and five injured in one of the deadliest terror attacks in Jammu and Kashmir when a Jaish suicide bomber rammed a vehicle carrying over 100 kg of explosives into their bus in Pulwama district.

India slammed Pakistan over the attack carried out by JeM and asked the neighbouring country to stop supporting terrorists and dismantle terror infrastructure operating from its soil.

Meanwhile, Pakistan said the terrorist attack in Pulwama district is "a matter of grave concern" even as it strongly rejected Indian media and government's allegations of the country's link to the strike "without" probe.

American experts suspect the role of Pakistani intelligence agency ISI in "supporting the masterminds" of the Pulwama terrorist attack in which 40 CRPF personnel were killed.

Pakistan-based Jaish-e-Mohammad (JeM) has claimed responsibility for one of the deadliest terror attacks in Jammu and Kashmir.

The experts on South Asia said the terror strike shows the United States has failed to persuade Pakistan to act against Jaish-e-Mohammad and other terrorist groups.

"The self-proclaimed involvement of JeM in the attack raises serious questions about the role of the ISI in supporting the masterminds of this operation," Bruce Riedel, a former CIA analyst, said.

The terrorist attack, which has direct footprints inside Pakistan, poses the first major challenges to Pakistan Prime Minister Imran Khan, said Riedel, who is now a scholar at the Brookings Institute think-tank.

"This will be a real challenge for Imran Khan, the first serious challenge of his administration," he said.

By claiming such quick credit for the attack, Jaish-e-Mohammed is clearly indicating that they will continue to cause trouble in the region and stoke tensions between Pakistan and India, he said.

In the wake of this attack, there will likely be increased pressure on Prime Minister (Narendra) Modi to take action against all militant groups still active in Kashmir," said Goel.

Alyssa Ayres from the Council on Foreign Relations said, "Unfortunately, the attack also shows the limits of US and international policy efforts to date to persuade Pakistan to take serious action against these groups. The urgent question is what else the international community can do.

According to Moeed Yusuf from the US Institute of Peace, the current situation has all the making of an India-Pakistan crisis.

Ironically, the biggest deterrent to any escalation is the presence of Saudi Crown Prince Muhammad Bin Salman in the region, he said.

"Salman arrives in Pakistan Friday and is coming to India too. His visit will be seriously overshadowed. The Saudi relationship is too important for either side to want that to happen," he noted.

I think the damage to India-Pakistan relations is going to be immense even if the situation doesn't escalate. The hope was that India and Pakistan will get back to talking after the Indian elections later this year. I think the hawks on both sides are going to make it very difficult for that to happen now, Yusuf said.

Terrorist attacks as in Kashmir are not possible without an ideology or theology that justifies terrorism and brainwashes its followers that massacring others leads a person to paradise. The terrorist mindset must be removed along with the terrorist infrastructure on the ground, said noted Hindu scholar David Frawley.

The latest attack by Jaish-e-Mohammed is another example of how Pakistan's intelligence services continue to sponsor terrorist incursions into India, Washington-based Hindu American Foundation said.

China should be ashamed of itself in blocking Azhar's ban at the UN. Indian diaspora demands that if Pakistan is sincere in seeking peace with India, it should arrest Maulana Masood Azhar and his cohorts and disband all terrorist organisations station in Pakistan.

"Pakistan is a pariah nation anyhow and if it wants to exist in the real world, it should not play games, resort to lies, and abet terrorism. It should get rid of all terrorist organization from its soil, it said.

"It's long past time for Pakistan's establishment to root out these fanatic groups, many of which operate in the open and with the support of elements of the Pakistani state. It's unacceptable. And it's outrageous the world didn't draw a collective red line on this a long time ago," Jeff Smith of the Heritage Foundation said.