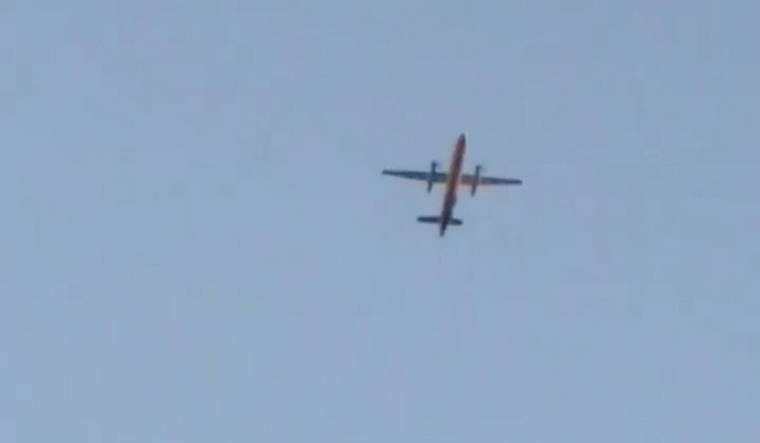 A Horizon Air Bombardier Dash 8 Q400, reported to be hijacked, flies over Fircrest, Washington, the U.S., before crashing in the South Puget Sound | Leah Morse/via Reuters

An “unauthorised flight” took off from the SeattleTacoma International Airport on Friday and crashed minutes later in the south Puget Sound, the airport authorities reported. The flight was flown by an airline employee but there were no passengers onboard the flight.

The incident created a scare and US Air Force jets scrambled to intercept the twin turboprop aircraft. When the aircraft crashed two USAF F-15 jet were on pursuit.

There was no indication that the incident was an act of terror, Pierce County Sheriff Paul Pastor said. Pastor said the pilot appeared to have acted alone and was likely killed in the crash. Sheriff’s officials said the man was “suicidal” and that he was a 29-year-old airline mechanic.

Witnesses reported seeing the plane being chased by military aircraft before it crashed near Ketron Island, the Associated Press reported. The sheriff’s department said they were working to conduct a background investigation on the man, whose name was not immediately released. The man could be heard on audio recordings telling air traffic controllers that he’s “got a lot of people that care about me” and that he is “just a broken guy.”

Alaska Airlines said that it was aware of an unauthorised take-off of a Q400 airplane operated by a sister carrier Horizon Air. "More information as we learn more," it said on Twitter.