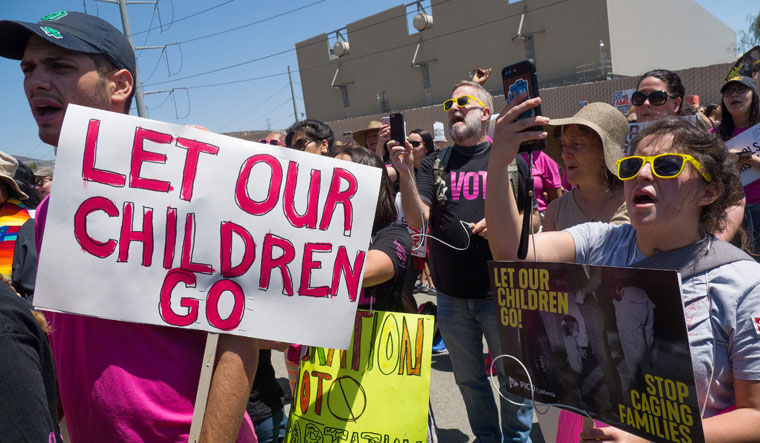 Protestors led by a coalition of interfaith religious leaders demonstrate against US immigration policy that separates parents from their children, June 23, 2018 outside the Otay Mesa Detention Center in San Diego, California | AFP

The US Homeland Security Department said late Saturday the government has reunited 522 children separated from adults as part of a “Zero Tolerance” initiative and plans to reunite another 16 children over the next 24 hours.

The department said in a statement US Customs and Border Protection expects a small number of children separated for reasons other than zero tolerance would remain separated, including if the familial relationship cannot be confirmed.

President Donald Trump on Wednesday signed an executive order to end his policy of separating immigrant children from their families on the US-Mexico border, after images of youngsters in cages sparked outrage at home and abroad.

As of June 20, the Department of Health and Human Services (HHS) had 2,053 separated minors being cared for in HHS-funded facilities, and it was “working with relevant agency partners to foster communications and work towards reuniting every minor and every parent or guardian via well-established reunification processes.”

HHS also said in a release that it has a process to “ensure that family members know the location of their children and have regular communication after separation.”

A complaint reported by the national news media is that some parents did not know where their children were and had little or no communication with them.

The US Immigration and Customs Enforcement (ICE) agency has dedicated the Port Isabel Service Processing Center in Texas as the primary family reunification center.

All parents are given the telephone number of an information line, which is staffed Mondays through Fridays from 8 a.m. to 8 p.m. And each ICE field office will have “Juvenille Coordinators” to manage reunification cases.

“Zero Tolerance” is a policy US Attorney General Jeff Sessions announced in April, declaring that all immigrants apprehended while crossing the US-Mexico border illegally should be criminally prosecuted.

The policy has led to family separations because when border agents refer apprehended migrants to court for prosecution, parents are held in federal jails to await trial by a judge while the children remain in either border control custody or are moved to other facilities.

Most of the children are from Central America, especially Guatemala, Honduras and El Salvador.

Currently, 17 percent of minors in HHS funded facilities were placed there as a result of the Zero Tolerance enforcement effort, and the remaining 83 percent arrived in the United States without a parent or guardian, it said.

A small number of children will remain separated “generally if the familial relationship cannot be confirmed,” or “we believe the adult is a threat to the safety of the child, or the adult is a criminal alien”, HHS said.