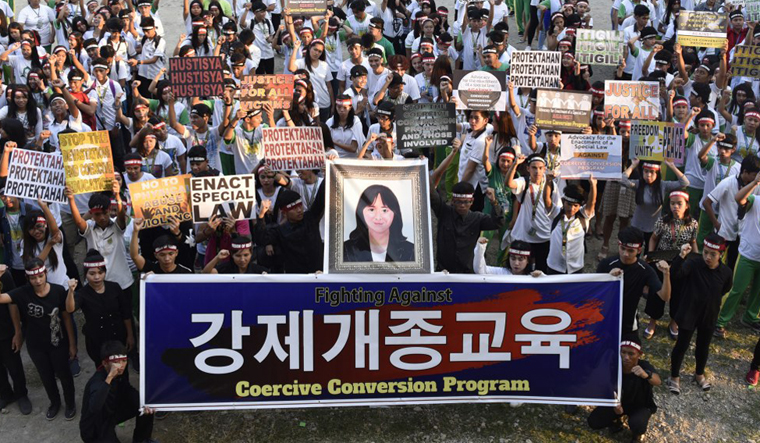 More than 1,20,000 people gathering in Seoul and the other major cities of South Korea on January 28 to protest against coercive conversion

On December 29 of last year, a 27-year-old woman, Ji-in Gu, was killed while she was being held captive at a secluded recreational lodge in Hwasun, Jeonnam, South Korea. On January 18, the parents of the woman were held responsible for the murder. According to the police department of Hwasun, they bound and gagged their daughter, leading to suffocation. The autopsy revealed a “high possibility of cardiopulmonary arrest due to hypoxic hypoxia”. The death has ricocheted from a ‘family matter’ to a national issue, with more than 1,20,000 people gathering in Seoul and the other major cities of South Korea on January 28 to protest against coercive conversion, of which the woman was a victim.

Coercive conversion is apparently a wide-spread phenomenon in South Korea. It is conducted by the Counselling Centre of Cult, which was established under the leadership of Pastor Yong-Shik Jin. Its pastors are from the Protestant churches in the country. They try to forcibly convert people from what they call “cult” churches, like the Shincheonji Church of Jesus, established in 1984, which Ji-in Gu was a member of. They allegedly enlist the aid of the family members of the person to kidnap her and take her to secluded places, where she is forced to undergo coercive conversion education, often through violent means.

The victim had earlier, in July 2016, been confined at a Catholic abbey in the city of Jangseong for 40 days. She had said that although she had escaped from the abbey, she lived in constant fear of being kidnapped again and could no longer trust her family who had colluded with the pastors to kidnap her. After that, she had sent a formal petition to the President of the Republic of Korea asking for the closing down of the Counselling Centre of Cult and to legally punish coercive conversion education pastors. “Please help innocent people by legislating a new law that does not discriminate against religions,” she had written.

“I used to occasionally see her in church,” says Sun Woo Kim, another member of the Shincheonji Church. “She was a very bright girl. More than anything, she wanted peace in her family. That’s why she returned to them even after being kidnapped and made to undergo forcible conversion.”

He says that these pastors go to various churches and conduct seminars. They corrupt the family members and demand money in exchange for converting to Protestantism their children or spouses who have joined other churches.

“More than a conflict between two churches, this is a case of human rights violation,” says Kim. “The politicians consider these pastors as vote banks and hence take no action against them. The police say that conversion is a private matter to be settled within the families and hence refuse to interfere. Ten years ago, a similar case had taken place in which a woman was killed by her husband. While the husband was imprisoned, the pastors went scot-free.”

He says that the pastors use brutal methods to indoctrinate the victims, who are mostly women. “They use sleeping pills to kidnap you,” he says. “Then with duct tape and handcuffs, they subdue you. The victims will be kept close watch over. They’re not even allowed to close the door while using the washroom to prevent them from escaping.”

Sun Woo Kim, another South Korean who vociferously opposes coercive conversion, gives some figures. More than 1,000 people have come out as being victims of these programmes, with 663 claiming to have been kidnapped and 541 beaten. “So, this is more serious than simply being a ‘family matter’,” she says.

“Who gave these pastors the authority to confine, shackle, beat, and murder people for their faith?” reads a petition by the Association of Victims of Coercive Conversion Programmes. “Their disguise is holy and pious, but their actions show that they are willing to commit murder to arbitrarily convert people’s beliefs. The authorities must face reality and take appropriate action against this practice. We should thoroughly investigate the recent death and reveal the true facts. We should root out the real culprit and cause for destruction of this family. Justice should be served, and conversion pastors must be held accountable for their actions. The constant violation of people's universal human right to freedom of religion through abduction, confinement, suffocation and many other forms of physical abuse and violence must come to an end.”