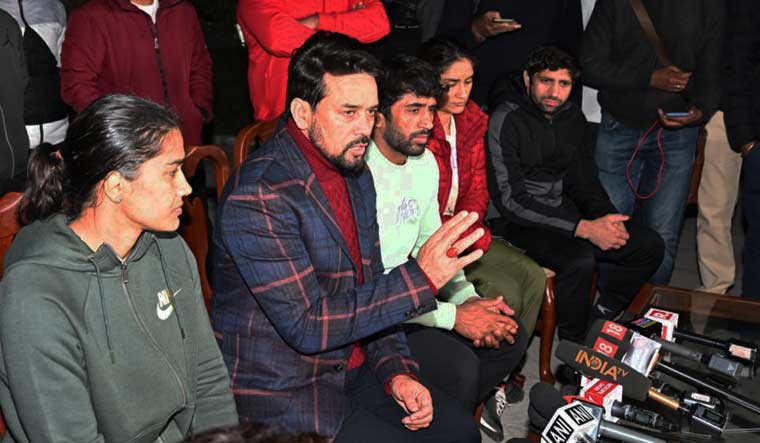 The Union Sports Ministry on Saturday suspended Vinod Tomar, assistant secretary of the Wrestling Federation of India (WFI), amid row over a series of allegations raised by country's top wrestlers against the federation and its president Brij Bhushan Sharan Singh. The ministry has also directed the WFI to suspend "all ongoing activities with immediate effect", including the Ranking Tournament in Gonda, Sharan's stronghold in Uttar Pradesh.

The wrestlers, who sat on a dharna in Delhi and alleged that the federation chief sexually harassed women wrestlers and acts like a "dictator", had called off their protest on Friday night after the government announced that it would form an oversight committee to probe the charges. The government had also said that the WFI chief would step aside till the investigation is over.

Meanwhile, Tomar denied any communication regarding his suspension, stating that he knew about it only through media.

"I did not know about this. I only learned through a call from ANI that I have been suspended. I did not get any prior information regarding this. I have not done anything wrong," Tomar told the news agency.

He termed the charges against Sharan as 'baseless' and said the wrestlers had not produced any evidence to support their claims. "The allegations are baseless. It has been 3-4 days (since the wrestlers sat in protest) and they still haven't produced any evidence. I have been associated with them for the past 12 years and I never came across any such incident or allegation," he said.

The WFI, too, in its reply to the government on Saturday rejected all allegations against Sharan and the federation, saying the grapplers' protest was motivated by a "hidden agenda to dislodge the current management".

"The WFI is managed by an elected body as per its constitution, and therefore, there is no scope for arbitrariness and mismanagement in WFI by any one individually, including the president," the federation said in its response.

Wrestlers including Vinesh Phogat, Bajrang Punia, Sakshi Malik and Ravi Dahiya, started a sit-in protest at Jantar Mantar on Wednesday and demanded the sacking of the WFI chief. They also demanded that the WFI be disbanded immediately and a new panel be formed.