Murray is a five-time runner-up at Melbourne Park 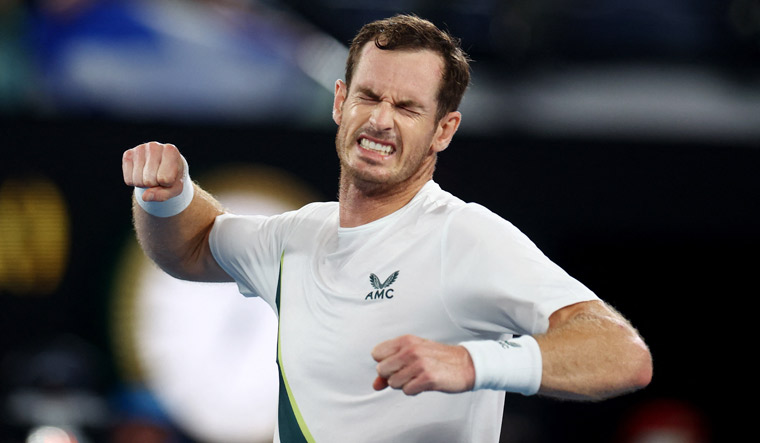 Murray built a huge lead, let it disappear completely, then needed to save a match point against Matteo Berrettini, who is nearly a full decade younger and ranked more than 50 places higher, before managing to pull out a 6-3 6-3 4-6 6-7(7) 7-6(10-6) triumph across more than 4 1/2 hours on Tuesday in the Australian Open's first round.

This was the three-time major champion's first defeat of a top-20 opponent at a Grand Slam tournament since 2017. That was before Murray thought he would need to retire - and indeed was given a career send-off at Melbourne Park in 2019, when he exited in the first round a year after his first hip operation.

After a second surgery inserted a metal hip, Murray decided to try to continue playing. This sort of evening was likely what he had in mind when he pressed on.

"I've put a lot of work into the last few months with my team to give me the opportunity to perform on stadiums like this, in matches like this, against players like Matteo," Murray told a crowd that roared with approval for him. "And it paid off tonight."

It was a performance filled with the sort of grit that defined much of Murray's time on tour, that carried him to championships at the US Open in 2012 and at Wimbledon in 2013 and 2016 and to two Olympic singles gold medals.

Murray is also a five-time runner-up at Melbourne Park, with four losses in the final to Novak Djokovic and one to Roger Federer.

Still, there were moments on Tuesday when Murray played as he did a long time ago, diving to hit a volley before slamming to the blue court scraping his right knee or sprinting to somehow reach seemingly unreachable shots, then looking up into the stands at his coach, Ivan Lendl, and shaking a fist while yelling, "Let's go! Come on now!"

Murray raced through the first two sets in less than 1 1/2 hours before the big-hitting, big-serving Berrettini turned things around and took the match to a fifth, even coming within one point of victory at 5-4 in that set but faltering and flubbing an easy backhand.

By beating the 13th-seeded Berrettini, who was the runner-up at Wimbledon in 2021, Murray became only the fifth man in the Open era with 50 match wins at the Australian Open, joining Djokovic, Federer, Rafael Nadal and Stefan Edberg.

They played under a closed roof at Rod Laver Arena because of temperatures that soared up to 100 degrees Fahrenheit (38 Celsius) and caused suspensions of play that lasted hours in matches on smaller courts that can't be covered.

Other men advancing on Tuesday included No. 5 Andrey Rublev, No. 8 Taylor Fritz, No. 9 Holger Rune, No. 12 Alexander Zverev and No. 27 Grigor Dimitrov, while winners in the women's field included No. 4 Caroline Garcia, No. 5 Aryna Sabalenka, No. 9 Veronika Kudermetova and No. 16 Anett Kontaveit.

But Garbie Muguruza, a two-time Grand Slam champion and the runner-up at Melbourne Park in 2020, lost her fifth consecutive match to start the year, eliminated 3-6 6-7(3) 6-1 by Elise Mertens.