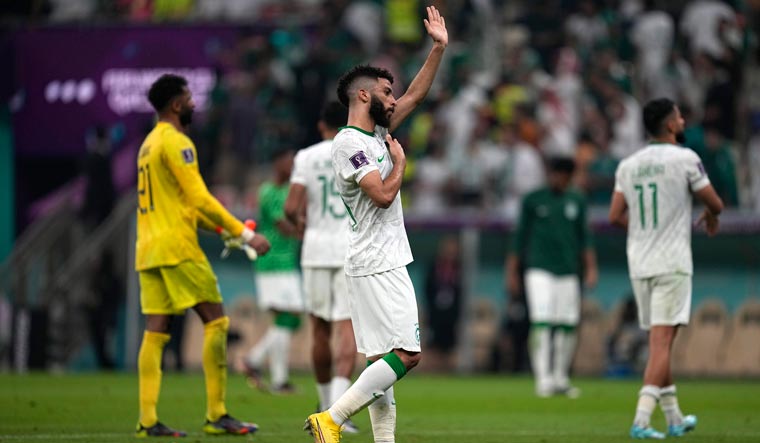 From a generational-defining win over Lionel Messi and Argentina to the recent reports that Cristiano Ronaldo could soon be on his way to play soccer in the kingdom, Saudi Arabia has caused a sensation at the World Cup.

The Green Falcons have nothing to be ashamed about after being eliminated from the following a 2-1 loss to Mexico on Wednesday.

The second-lowest ranked team in the tournament at No. 51  one spot behind host Qatar  and ahead of only 61st-ranked Ghana, Saudi Arabia was competitive from start to finish at the first World Cup in the Middle East.

"We did our best. Today it was more difficult for us," said Herv Renard, Saudi Arabia's French coach.

"But we don't have to forget what we did together.

The Saudis opened with a surprising 2-1 victory over Argentina and also played solidly in a 2-0 loss to Poland before conceding two second-half goals to Mexico to finish last in Group C.

Salem Al-Dawsari, the team's star No. 10, pulled a goal back in added time, before the Saudi players bent over on the field at the final whistle in prayer and then stood up to applaud their fans.

Strong goalkeeping from Mohammed Alowais prevented Mexico from scoring another goal  which could have sent the South Americans through to the round of 16. Instead, it was Argentina and Poland who advanced in the most wide-open group of the tournament.

With Renard motivating the team in his emblematic white shirt on the sidelines, Saudi Arabia proved tough to beat with a team featuring all 26 players based at home.

The fact that none of the Saudis play abroad may have been a surprise factor but the reality is that the country's best players don't need to go to Europe for rich contracts when they are paid handsomely in the lucrative Saudi league.

A high-paying contract is exactly what could lure Ronaldo to join six members of the Saudi national team at Al Nassr, one of the country's leading clubs.

The reports linking Ronaldo with Al Nassr come after the five-time Ballon d'Or winner had his contract terminated by Manchester United.

Saudi-controlled Newcastle is also reportedly in the market for Ronaldo.

But whether Ronaldo goes to a Saudi or Saudi-owned club or not, the country's national team leaves Qatar with plenty of newfound confidence.