Qatar is staring at an exit from the World Cup 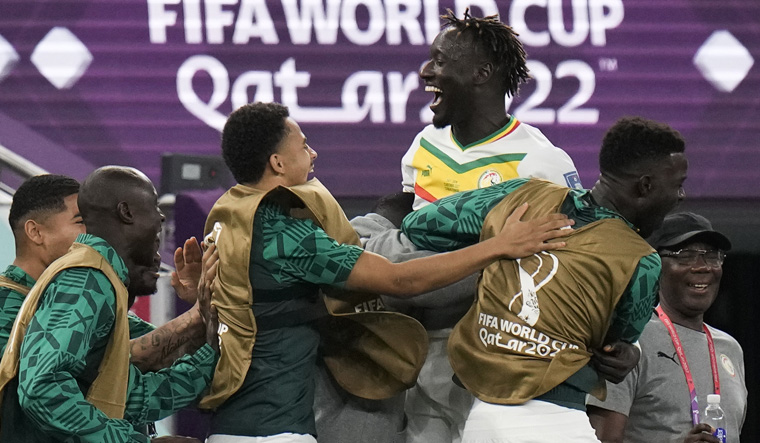 Senegal's Famara Diedhiou, (centre), celebrates with his team after scoring a goal during the World Cup group A soccer match between Qatar and Senegal, at the Al Thumama Stadium in Doha | AP

Senegal sent the host team to a second loss at its home tournament on Friday after seizing on a defensive error from the Qatar team for the opening goal in a 3-1 victory.

Qatar's elimination from the World Cup could now come on Friday and less than a week into the tournament it's been preparing to play in for 12 years if Netherlands and Ecuador draw in the day's other Group A game, or if the Dutch win.

It would confirm Qatar as the worst-performing host team in the 92-year history of the World Cup.

Senegal, on the other hand, got its campaign back on track after losing 2-0 to the Netherlands in the first match.

Against Qatar, Senegal striker Boulaye Dia drilled in the first goal after defender Boualem Khoukhi tried to make a clearance under no pressure, didn't connect properly and landed on his backside. The ball dribbled away from Khoukhi. And Dia, grateful for the gift, lashed it in.

Famara Diedhiou made it 2-0 at the start of the second half with a header from a corner while two Qatar defenders failed to stop him.

Qatar was denied a penalty and the chance of the lead before Dia's goal, though, when Akram Afif was clear on the left and then knocked over by a charging Ismaila Sarr. Referee Antonio Mateu of Spain didn't award a penalty even though replays suggested that contact was made.

Qatar did at least score a goal through substitute Mohammed Muntari. He headed in to finally beat Edouard Mendy after the Chelsea goalkeeper had pulled off two world-class saves to deny Qatar, which rallied in the second half.

But Qatar's hopes of a fightback to boost its qualification chances lasted six minutes before Senegal substitute Bamba Dieng reestablished the two-goal advantage.

Qatar's second defeat of the World Cup it lost 2-0 to Ecuador in the opening game pushes it to the brink of an embarrassing exit which would underline one of the many criticisms of the decision to give the wealthy Gulf country the World Cup; It has no established soccer tradition.

Qatar is still in danger, even if it survives through Friday, of registering the worst performance by a host team.

It has already made unwanted history as the first host to lose the opening game of the tournament and, while South Africa in 2010 is the only other host team to be eliminated in the group stage, the South Africans at least went out with a win and a draw from their three games.

Qatar spent around $220 billion on the first World Cup in the Middle East, according to estimates, but has found that great wealth can't buy a world-class soccer team.