Barring a blip in the second game, Sharath and Akula pair was in complete control 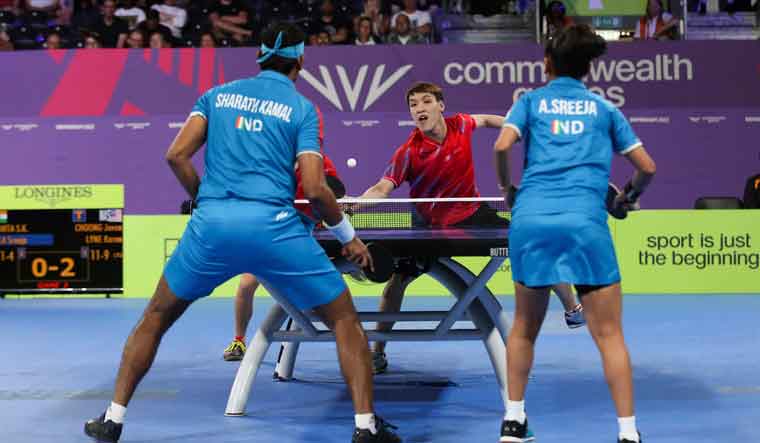 In what looks to be a literal gold haul for India at the Commonwealth Games (CWG), Indian mixed doubles pair of Achanta Sharath Kamal and Sreeja Akula won gold in table tennis competition. Barring a blip in the second game, Sharath and Akula pair was in complete control of the tie, comfortably beating Javen Choong and Karen Lyne of Malaysia 11-4, 9-11, 11-5, 11-6 in the gold medal contest.

Eldhose Paul had won a historic triple jump gold in a 1-2 finish for India.

The indomitable Nikhat Zareen added a Commonwealth Games light flyweight (50kg) title to her bulging trophy cabinet while Amit Panghal (51kg) began his redemption journey with a much-needed gold winning show, here on Sunday. Nikhat, who is on a winning spree since the Nationals last year, asserted her dominance over Northern Ireland's Carly Mc Naul as she punched her way to a comprehensive 5-0 win in her maiden CWG appearance.

Amit Panghal avenged his 2018 Commonwealth Games final loss against Kiaran MacDonald by clinching the title with a comprehensive 5-0 win over the favourite. Indian boxers made it three out of three golds on the day as young Nitu Ghanghas (48kg) too reigned supreme on her CWG debut.

But Sagar Ahlawat will have to be content with a silver medal as he lost by an unanimous 0-5 verdict against England's Delicious Orie in the men's over 92kg (super heavy weight) category, in what was the final bout of the Games. Sagar started positively in the first round but Orie completely dominated the next two as the Indian started to tire out.