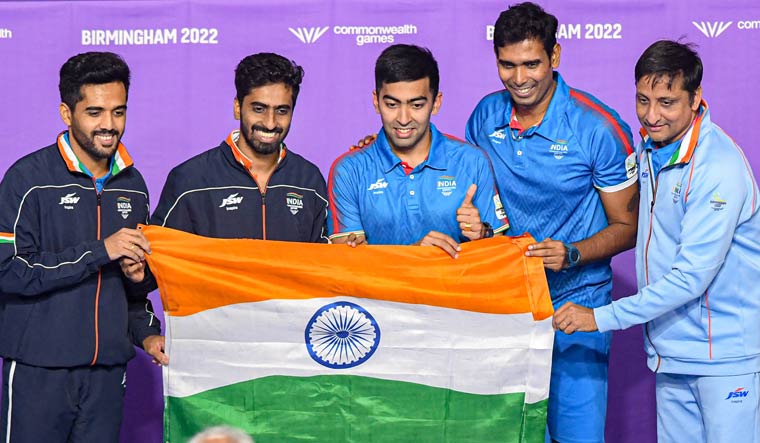 With a rich haul of 61 medals (22 gold, 16 silver, and 23 bronze) this edition of the Commonwealth Games in Birmingham turned out to be one of the most memorable editions for the 210-strong Indian contingent.

From athletics to racquet sports, cricket to hockey, boxing to wrestling, the Indian athletes finished with podium finishes in almost every event they took part in. We take a look at gold medallists in the showpiece event.

The Bengal born weightlifter clinched his maiden CWG gold and went on to set a Games record 313kg. He lifted 143kg in snatch (Games Record and also equal to his previous PB) and 170kg in clean and jerk.

The 20-year-old won the silver medal at the 2021 Junior World Weightlifting Championships and is also a two-time Commonwealth Championships gold medallist.

The Mizoram weightlifter won gold in the 2022 Commonwealth Games in the 67kg category, with a Games record lift of 140kg in snatch and 160kg in clean and jerk.

The 19-year-old represented India in the 2018 Summer Youth Olympics in Buenos Aires and won India's maiden gold in the event in Boys' 62kg category.

The superstar Manipuri weightlifter successfully defended her 49kg title and gave India the first gold at the Birmingham Games.

The Tokyo Olympics silver medallist aggregated a total of 201kg (88kg + 113kg) to stamp her authority in the competition and achieve a Commonwealth Games record in the process.

The India lawn bowls women's four team of Rupa Rani Tirkey, Lovely Choubey, Nayanmoni Saikia, and Pink Singh got the country hooked to a rarely-followed sporting event with their inspiring and sensational show when they bagged a historic gold in Birmingham.

It was India's maiden final appearance in the women's fours format of the competition.

Bajrang Punia completed a hat-trick of Commonwealth Games medals when he clinched gold in the men's 65kg free-style event.

The Tokyo Olympics bronze medallist had won silver in his CWG debut in 2014 in Glasgow and then bettered the colour of his medal in Gold Cost four years later by winning a gold.

Sakshi Malik won her third medal at the Commonwealth Games when she annexed gold after beating Canada's Ana Godinez Gonzalez by fall.

A Junior Commissioned Officer (JCO) in the Indian Army, Deepak also won a silver medal at the 2019 World Wrestling Championships in the freestyle 86 kg category.

Dahiya is also a Tokyo Olympics silver medallist from 2020, bronze medallist from World Wrestling Championships in 2019, and a three-time Asian champion.

She is also the first Indian woman wrestler to win Gold at both Commonwealth and Asian Games (Jakarta 2018).

Making his Commonwealth Games debut in Birmingham, the 19-year-old grappler clinched his maiden gold at the showpiece by defeating Muhammad Sharif Tahir of Pakistan in the final with score 9-0.

Reigning World Champion Nikhat Zareen blazed the stage in Birminham as she won her maiden gold medal in the women's 50kg flyweight final event. She is also a bronze medallist in the 2019 Asian Championships.

Amit Panghal won his maiden gold in Birmingham on the penultimate day of the showpiece event.

The reigning Asian Games champion, he is also the only Indian male boxer to win a world boxing championships silver medal and the current world No. 1 in International Boxing Association's (AIBA) 52kg category.

The 21-year-old Haryana girl won the first medal for India in boxing at Birmingham when she bagged gold in the women's 48kg final.

Sudhir, who is also an Asian Para Games bronze medallist from the 2018 edition, lifted 208kg in his first attempt before increasing it to 212kg in his second effort to gather 134.5 points and break the Games record.

Having won silver (2018 Gold Coast) and bronze (2014 Glasgow), an elusive gold was what missing from Sindhu's kitty and she did it in style in Birmingham.

The two-time Olympic medallist gave India its first badminton gold on the last day of this edition of the Games.

Star shuttler Lakshya Sen made a memorable CWG debut with his maiden gold in Birmingham.

Sen has been in rich vein of form for some time now having won his first Super 500 title in January, finishing runners-up at the All England Championships and German Open and also winning the prestigious Thomas Cup.

The men's doubles pair of Satwiksairaj Rankireddy and Chirag Shetty bettered the colour of their medal (silver in Gold Coast 2018) and clinched gold in Birmingham after defeating England's Ben Lane and Sean Vendy in straight games.

Rankireddy and Shetty were also part of the Indian team that won the historic Thomas Cup title earlier this year.

Veteran Sharath Kamal's name will go down in history as he became only the second Indian paddler to win two gold at the Commonwealth Games, the first being in Melbourne in 2006 and the latest one arriving in Birmingham in style.

With his spectacular gold in Birmingham, Sharath's overall medal tally has gone up to 13 at the showpiece event since his debut in the 2006 edition.

Sharath Kamal and Sreeja Akula clinched the mixed doubles gold in Birmingham by defeating Javen Choong and Karen Lyne of Malaysia 3-1 in the final.

With Sharath Kamal cementing his CWG legacy with a slew of medals, the top prize was a deserved reward for the little Sreeja, who missed out on a bronze in the singles event.

The Indian men's table tennis team retained its Commonwealth Games gold medal after a close fight against Singapore in the final.

The likes of Harmeet Desai, Sanil Shetty, Sharath Kamal, and G Sathiyan gave India's its seventh since the sport's introduction in Manchester 2002.

Bhavina, who is also a silver medallist at Tokyo Paralympics, has won a slew of national and international competitions over the years, which includes a silver medal in the women's singles Class 4 at the Asian Para Table Tennis Championships in Beijing in 2013.

The icing on the cake was that India also won silver in the same event with his compatriot Abdulla Aboobacker finishing second with a best jump of 17.02m.