Other players, too, joined in to slam the broadcaster, after Elgar got the reprieve 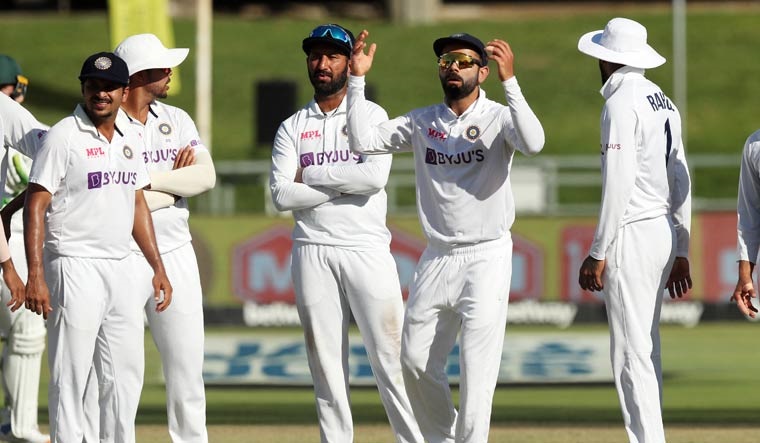 India skipper Virat Kohli and his teammates lost their cool during the final 45 minutes on the third day after rival skipper Dean Elgar got a massive reprieve due to a contentious DRS decision.

Some of the comments made about umpiring and technology as well as broadcasters might not go down well with the match referee and the Indian skipper may have to cop a financial penalty.

The incident happened in the 21st over when Ravichandran Ashwin flighted one which dipped and then straightened to beat a lunging Elgar's bat. Umpire Marais Erasmus straightaway lifted his finger but Elgar appealed for DRS.

Once he saw on big screen that he was beaten, he started trudging back only to his delight to find that the ball was going over the stumps.

While it looked dead plumb, the reversal of decision saw Kohli kicking the ground in disgust as all kinds of chatter started.

The players knowing that the stump microphone catches every bit of verbal stuff, the players made it a point to let everyone in South Africa know their feelings.

"Whole country is against 11 players," said one while the other said, "broadcasters are here to make money boys."

"I hope the stump microphone is recording it," said another.

Ashwin also could not stop himself from taking a dig at the ball-tracking technology of the broadcaster, saying, "You should find better ways to win Supersport."

Kohli added to that, "Focus on your team as well and not just the opposition. Trying to catch people all the time."

Kohli had in fact sledged Elgar even before that when he made a snide remark about Elgar being intimidated by Jasprit Bumrah.

'Unbelievable. After a Man of the Match performance in the last game, running (away) from Jasprit. Chirping for 13 years, Dean and you think you are gonna keep me quiet," Kohli said from slips.

However, this constant chatter did allow the focus to drift as South Africa got some quick runs after that.

At the end of the day's play, India bowling coach Paras Mhambrey tried to douse the fire.

"We saw it, you saw it. I'll leave that for the match referee to have a look at it. There’s nothing I can comment on it now. We've seen it all, just want to move on with the game now."