Haryana CM M.L. Khattar was among the first to announce rewards for Neeraj Chopra 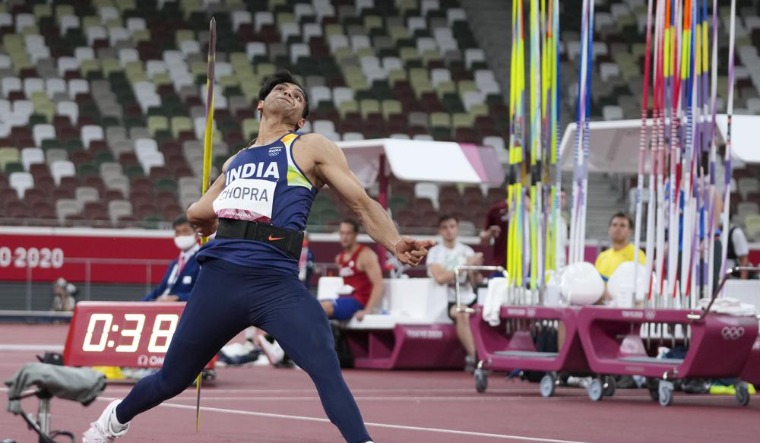 Neeraj Chopra in action at the Tokyo Olympics | AP

Neeraj Chopra was the talk of the town in India from early evening on Saturday and is expected to remain so for at least a few more days. The only gold medallist for India at the Tokyo Olympics and the first track and field athlete from the country ever to get the medal, Neeraj Chopra has been flooded with cash rewards and other prizes.

The Indian Olympic Association had announced before the start of the Olympics that an Indian athlete winning a gold medal would get Rs 75 lakh as cash reward, but it has not yet reiterated that Neeraj would get the money.

So what all has he got, until Sunday morning:

1) Haryana Chief Minister M.L. Khattar was among the first to announce rewards for Neeraj Chopra. Khattar declared that according to the Haryana government's sports policy, "Neeraj Chopra will get a cash reward of Rs six crore, a Class-I job and a piece of plot of land at concessional rates." Khattar added Chopra would be made the head of the state's Centre for Excellence in Athletics being built in Panchkula.

2) Punjab Chief Minister Amarinder Singh followed soon after Khattar to announce a cash reward of Rs 2 crore for Neeraj Chopra. In a statement, Amarinder noted Neeraj Chopra's family had origins in Punjab and he had studied at DAV College, Chandigarh, and practised at the Netaji Subhas National Institute of Sports, Patiala.

3) Manipur Chief Minister N. Biren Singh tweeted, "On this historic day where India bagged an Olympic Gold medal in an athletic event after 100 years, the Manipur State Cabinet has decided to honour the Javelin throw Gold medalist @Neeraj_chopra1 by extending a reward of Rs 1 Crore."

4) The BCCI announced a cash reward of Rs 1 crore for Neeraj Chopra.

7) Private airline IndiGo announced it was offering unlimited free travel to Neeraj Chopra for one year until August 8, 2022.

8) Mahindra and Mahindra chairman Anand Mahindra showed that Twitter wishes are not always mere wishes. Responding to a tweet from a user who sought that Mahindra give an XUV 700 SUV to Neeraj Chopra, Anand said "It will be my personal privilege & honour to gift our Golden Athlete an XUV 7OO". Anand Mahindra tagged two executives of Mahindra to "keep one ready for him (Neeraj)".