To home or Rome? England take on Italy to end title drought 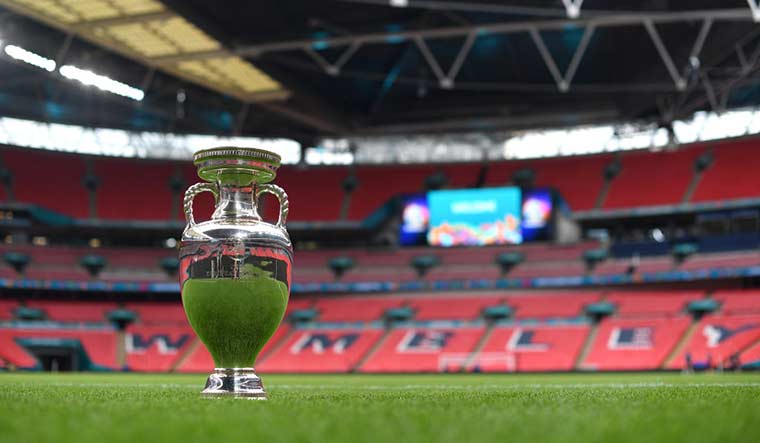 To hear the England players giddily singing along with the Wembley Stadium crowd to "Sweet Caroline" "so good, so good" encapsulates the youthful exuberance and carefree spirit of a group unburdened by trying to end the team's 55-year trophy drought on Sunday.

To hear Italy defender Giorgio Chiellini talk about going all the way shows how pressure to win a trophy for your country can be an enduring motivation for yourself and the squad, especially in the twilight of a career.

"Maybe at 36 you feel it more," Chiellini said, "because you understand more how hard it is and the work that goes into it."

The European Championship final on Sunday pits England, who haven't even reached a final since winning the 1966 World Cup, against one of the continent's most decorated teams.

The last of Italy's four World Cup victories came in 2006, when Chiellini had already made his international debut but didn't play at the tournament. But the team is a comparative underachiever in the European Championship with its only title in 1968.

Italy, however, have already reached the final twice in recent years in 2000 and 2012 whereas England haven't got close until now.

With the pandemic restricting travel to London, the permitted crowd of 66,000 at Wembley Stadium will be largely packed with England fans for the national team's greatest soccer moment since 1966, when coach Gareth Southgate wasn't even born.

Winning Euro 2020 would be a form or redemption for Southgate, whose penalty miss against Germany at Euro '96 denied England a chance of making the final.

"I know it won't be enough for me and for the rest of the staff and for the players if we don't win it now," Southgate said. "You get lovely messages that say 'whatever happens now,' but that won't be how it will be on Monday. We've got to get it right.

"We can win it, but we've got to get it spot on to win it. I said to the players ... people are respecting how they've been and that they've represented the country in the right way but now they have a choice of what colour medal."

Italy didn't even qualify for the 2018 World Cup but have excelled with a 33-match unbeaten run since then under coach Roberto Mancini.

"At the beginning, when he told us to have in our minds the idea of winning the Euro, we thought he was crazy," Chiellini said.

"Instead, during these years he has created a team which is now on the brink of doing that. And as he has repeated to us after every match, One centimeter at a time,' and now there is only the last centimeter left."

They have to find a way past an opponent that has conceded only one goal in its six games at Euro 2020 and coped with Harry Kane not even scoring in the group stage.

"England are clearly not just Kane because they have amazing players on both wings," Chiellini said, "and their substitutes could all be in the starting 11 of a team that wins this competition."

Just look at Federico Chiesa, who wasn't even starting for Italy initially at Euro 2020 but went on to score key goals in the knockout phase.

Take Raheem Sterling, whose place in the England lineup was questioned because of his failure to score at any previous tournament and his struggles with Manchester City.

He responded by netting the team's only goals in the group stage, the opener in the win over Germany in the round of 16, and his attacking threat won the penalty that led to England's semifinal winner against Denmark.

"What he's done for us and the unselfish part of his game goes unspoken about," said John Stones, Sterling's teammate with both England and City.

"But as players we see it. He's been a great threat going forward with how direct he's been in the games and it has been great playing with him.

"I'm sure he will be giving everything on Sunday, being that direct, and hopefully get another goal and see where it takes us."

The final takes soccer to the end of an unprecedented period of pandemic disruption since the European Championship began 60 years, completing a unique tournament staged across the continent like never before, after being delayed by a year.

Guarding against a presumption of glory might be the hardest thing for England fans energised by the football's coming home lyrics in its team anthem.

To home or Rome? We'll know on Sunday night.