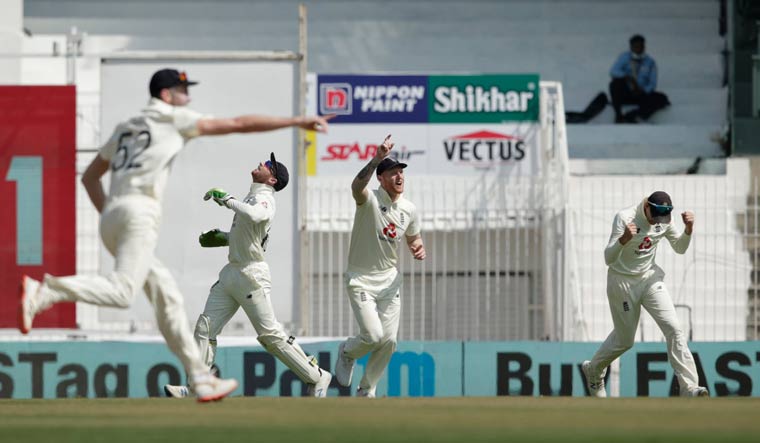 India were all out for 337 on the fourth day of the first Test against England, giving the visitors a huge first-innings lead of 241 runs here on Monday despite Washington Sundar's unbeaten 85. England decided not to enforce the follow-on. England were 1-1 when play broke for lunch.

Responding to England's mammoth 578, the home team finished well short of the follow-on target after Jack Leach broke an 80-run seventh-wicket partnership by dismissing Ravichandran Ashwin for the day's first breakthrough. India began the day at 257 for six and the duo of Sundar and Ashwin frustrated the English bowlers by adding 48 runs before left-arm spinner Leach struck. Ashwin made 31 off 91 balls, with three boundaries and a six. Leach, after a wicket-less third day, picked up his second of the match when he had Shahbaz Nadeem caught by Ben Stokes in the first slip.

Anderson, cleaned out Bumrah and ishant Sharma. Ishant was out to a well directed bouncer. In his very next over, Anderson got an edge off Bumrah which was taken sharply by Stokes who put in a dive to his right. India were bowled out for 337 with a defeicitit of 241 runs.

Joe Root decided against the follow-on. But England were off to a horrible start as Burns was sent back off the very first ball by Ashwin. Nadeem too troubled the batsmen, finding extra bounce off the pitch. England's solitary run before lunch came courtesy off a no-ball from Nadeem. England were 1-1 at lunch with a lead of 242 runs.