The draw pushed Kerala Blasters up to to the eighth position 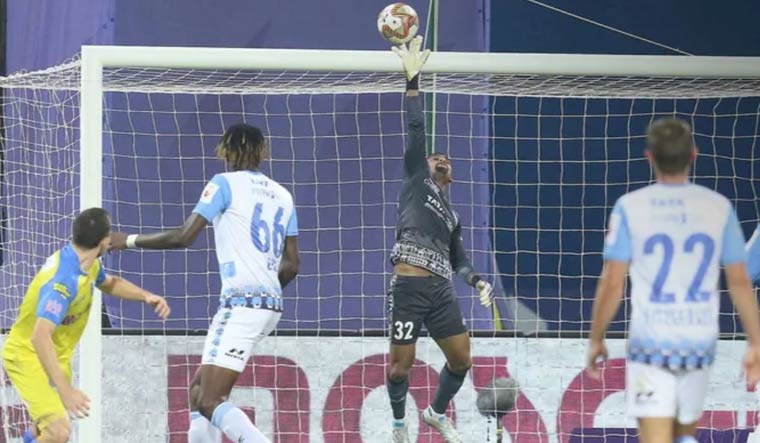 Players of Kerala Blasters and Jamshedpur FC in action during the ISL 2020-21 match at the GMC Stadium in Bambolim, Goa | via ISL official website

Kerala Blasters had themselves and misfortune to blame after being held to a goalless draw by Jamshedpur FC in the ISL 2020-21, at the GMC Stadium in Bambolim, Goa.

The Blasters hit the post thrice and also had a goal by Gary Hooper disallowed for off-side. To add to the drama, the Men in Yellow were denied a clear goal after Hooper's powerful long-ranger hit the underside of the crossbar and bounced inside the goalline and came back into play, but the referees failed to notice it.

Kerala Blasters were, by far, the superior team overall and created more chances than Jamshedpur but lacked the cutting edge in the final third, which denied them their fourth win of the season.

The first half proved to be a pulsating affair but attackers of both sides were guilty of missing chances.

Jamshedpur dominated the opening quarter and had the opportunity to take the lead early on, following a blunder from Kerala keeper Albino Gomes.

He miscued a clearance, gifting the ball straight to Nerijus Valskis. The striker popped a shot at goal but Albino recovered well in time by managing a finger-tip save, which kissed the far-post before going out.

Valskis missed another gilt-edged chance in the 30th minute after some lovely build-up play from Jamshedpur. Aitor Monroy found the Lithuanian in the box with a delightful lob but Valskis fluffed his chance as he attempted a volley.

Kerala dominated the second quarter and fashioned three big chances, only to be denied by the woodwork on all occasions.

The first was when Gary Hooper unleashed a long-range shot that struck the underside of the crossbar before bouncing back into play. However, replays suggested that the ball crossed the line but it went unnoticed by the officials.

Minutes later, Sandeep Singh whipped a teasing cross for Jordan Murray whose header brushed the upside of the frame.

After the restart, Kerala carried on from where they left off as they dominated the second half.

They had an opportunity to bag the opener after the hour mark when Khawlhring created space on the right and delivered a cross towards Murray at the far-post. The Australian's looped header, however, flew inches wide of goal.

Kerala threw the kitchen sink at their opponents as the game entered its final stages. They created chance after chance but lacked the finishing touch, and were forced to share points with Jamshedpur at the full-time whistle.

The draw pushed Kerala Blasters up to to the eighth position with Jamshedpur a rung above.