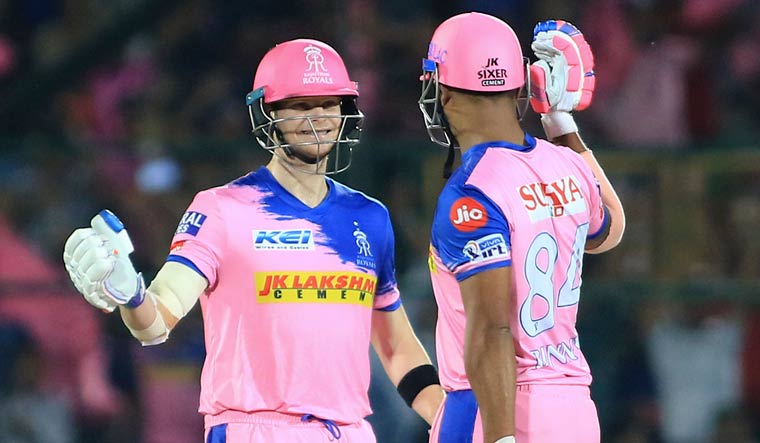 Cricket Australia on Thursday revealed that Steve Smith is following "concussion protocols" which are crucial for his return to cricket in the IPL and asserted that it is "not willing" to compromise with the fitness of the Rajasthan Royals skipper.

CA said it is working in tandem with RR to ensure his smooth return to competitive action after missing the entire England ODI series due to the concussion suffered during training.

"Cricket Australia has strict protocols when it comes to head impacts and concussions and, as we've seen over the last 12 months, we're not willing to compromise on those," CA's head of sports science Alex Kountouris said in a statement.

"Steve is making progress and working with our medical team through the concussion protocols required to return to play," he added.

Smith along with other England and Australia cricketers will arrive on Thursday night (UAE time) and undergo a six-day quarantine which means they will all miss action till September 23. RR's first match is on September 22 against Chennai Super Kings.

Smith was hit on the head during a net session prior to the first ODI in Manchester and since then recovered well but not enough to play.

Kountouris said the franchise and CA will be working together to monitor Smith's fitness upon his arrival in the UAE.

Smith had also endured a concussion during last year's Ashes game at the Lord's and subsequently missed a Test match.

"The conservative management of Steve through this injury is consistent with our approach to put the player's welfare first, as we did with him during the Ashes last year," Kountouris said.

The former physio, who has had a long association with the Sri Lankan national team followed by Australians, hinted that CA will not like Smith to be rushed into a match situation.

"We are striving to create environments where players trust that our medical team will always put their welfare first and therefore speak openly with them, whether this is about concussion, other injuries or mental health," he stated.

Kountouris said that a lot of research has gone into studying concussions and its related effects.

"We have done a lot of research over the last few years to better understand head impacts and concussions specific to cricket, and that has helped up in how we manage our players.

"We place the welfare of the player before the game because we strongly believe that is what’s best for the player."