Mumbai ODI: No black? White it is then, for anti-CAA protest

MCA, however, clarified that there was no ban on wearing black to the match 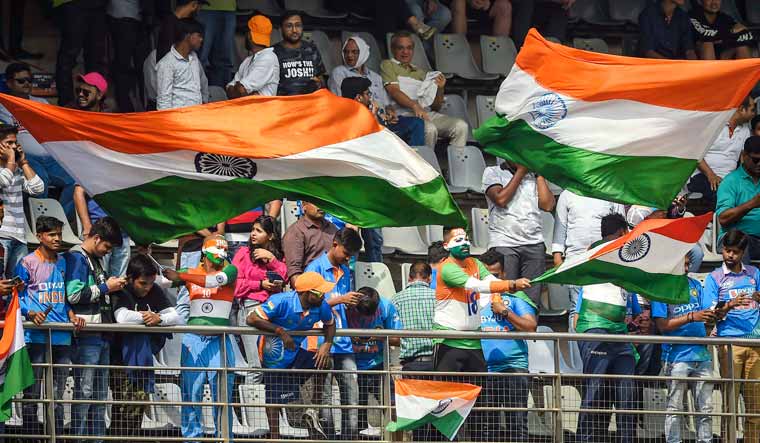 Fans cheer for their teams during the first ODI match between India and Australia, at the Wankhede Stadium in Mumbai | PTI

With India taking on Australia in the first ODI at the Wankhede Stadium in Mumbai, the Mumbai Cricket Association (MCA), it seems, wanted the focus to be firmly on cricket, given the anti-Citizenship Amendment Act protests across the country.

Hours before the match, a popular fan club in Mumbai—North Stand Gang – Wankhede—posted a tweet asking spectators not to wear black to the match. “IMPORTANT NOTICE* Those who are coming for #INDvAUS match, kindly don't wear black colour tshirts Entries are restricted for some security reasons for the same @BCCI @MumbaiCricAssoc”, they wrote.

The tweet led to speculations that MCA had banned the spectators from wearing black fearing anti-CAA protests.

*IMPORTANT NOTICE*
Those who are coming for #INDvAUS match, kindly don't wear black colour tshirts
Entries are restricted for some security reasons for the same@BCCI @MumbaiCricAssoc

Social media was abuzz that people wearing black clothing were not allowed inside the stadium by security guards fearing protests, but a senior MCA apex council official claimed that no such diktat was issued.

"There was no diktat about any colour, no posters of any sort were permitted inside the stadium as it was the instruction from the local police," the MCA member said.

The police, too, denied turning away spectators for wearing black and dismissed reports of having issued any such directive.

Interestingly, whether or not there was a ban, a group of students held protests against the Citizenship Amendment Act and the proposed National Register of Citizens, in the stadium.

Wearing white T-shirts, the students held banners that read 'No CAA', 'No NPR' and 'No NPC'. They, however, left before the end of Indian innings at the Wankhede Stadium.

They belonged to a group called Mumbai Against CAA.

"There were 26 persons in total and they were sitting in the Vijay Merchant Pavilion side. They themselves vacated the stadium as Indian wickets were falling in a heap," Fawad Ahmad, who belongs to the group, said.

It was a horrid day for Team India, however, crashing to a 10-wicket loss against the Aussies. Openers David Warner and Aaron Finch notched up centuries to overhaul the 256-run target in 37.4 overs.