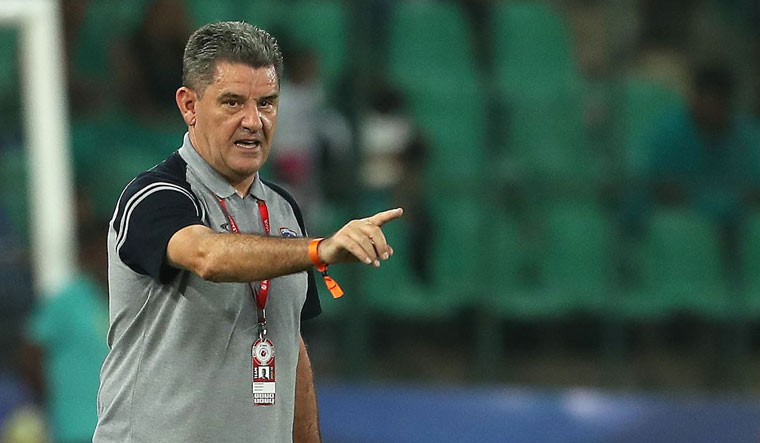 Life seems to have come to a full circle for Chennaiyin FC head coach John Gregory. He may well have coached the team for the last time, ironically, at the same venue where he provided the club with their greatest moment.

It was at the Sree Kanteerava Stadium in Bengaluru that Chennaiyin FC stunned rivals Bengaluru FC to win the Indian Super League title in 2018. Since then it's all gone downhill for Chennaiyin FC and the Englishman, as they finished at the bottom last season and are now left without a win or a goal in four matches.

“It is about time I sit down with the owner and had a talk. She has been supportive throughout but we can’t continue like this,” Gregory told the media after his side’s 0-3 defeat at the hands of Bengaluru FC at Sree Kanteerava on Sunday.

Whether this will signal the end of Gregory's time in India is in the hands of the owners, but the first English coach to win the ISL was the first to put his hand up and accept responsibility.

“We still have 14 games to play for in the ISL after the (international) break but I don’t see us picking up many points in the current scenario. Something needs to be done. I have carried this club on my shoulders for the last two years. It’s not easy. I have never worked so hard in life than I have done in the last two years. It might be time for somebody else to take over,” said Gregory, who cut a forlorn figure after his seventh straight away defeat in the ISL and without a win now for almost nine months.

Chennaiyin FC heads into the international break with plenty to think about.

The level of competition in the ISL has increased manifold and the journey has not been easy for Gregory and two-time champions Chennaiyin FC.

"This is the worst I have felt in the last two years. I have tried my best, but the club comes first," said the former Aston Villa manager.

The club showed faith in Gregory and was given a one-year contract extension even after finishing last in 2018-19. Chennaiyin FC also failed to qualify from the group stages of the AFC Cup.

He was backed well in the transfer market with additions of Lallianzula Chhangte, Vishal Kaith, Rafael Crivellaro and André Schembri. However, they picked up from where they left last season and have been quite underwhelming.

It remains to be seen if Gregory does take the exit route or would he still be at the helm of affairs when Chennaiyin FC return from the international break when they host Hyderabad FC on November 25.