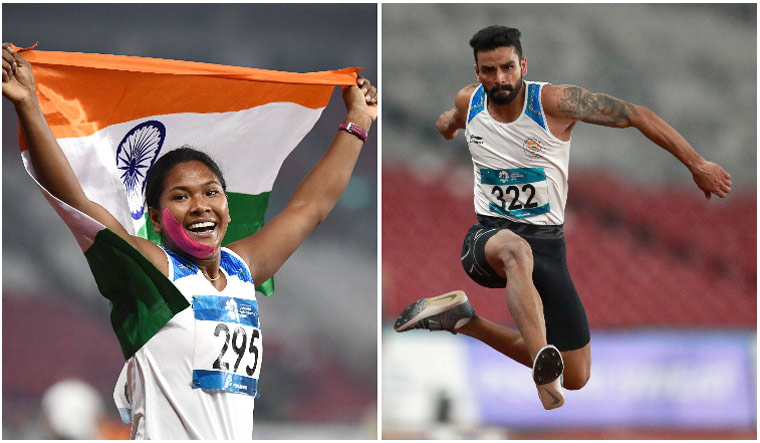 It turned out to be another great outing for India in the track and field events on day 11 of the 18th Asian Games in Jakarta, as triple jumper Arpinder Singh gave the nation its fourth gold in athletics, and 10th overall. He led the pack early with a jump of 16.77m in his third attempt, which was unsurpassed. The other Indian in the fray, Rakesh Babu, finished sixth with a jump of 16.40m.

Dutee Chand won her second silver at this Asian Games, finishing second in the women’s 200m final with a timing of 23.20s. The Bahraini, Edidiong Odiong, who had also won the 100m gold, took another gold with a timing of 22.96s.

In squash, the women’s team beat China 3-0 in a pool match to enter the semifinal. They will get at least bronze now.

In the hockey semifinal, the Indian women defeated China 1-0 in a tight match. This assures India of at least another silver, but the Indian women will start as favourites in the final against Japan.

In the women’s category, India’s Sarjubala Devi lost 0-5 to China’s Chang Yuan in the 51kg quarterfinals.

In pencak silat, India’s Simran and Sonia reached the final of the women’s doubles event, but finished seventh with 527 points. The gold-winning Indonesians had 574 points.

In cycling, young Esow Elban, the junior world number one in sprint, reached the quarterfinals, but missed out on a semifinal berth by 0.443 seconds.