Putin says the weapon has no analogues in the world 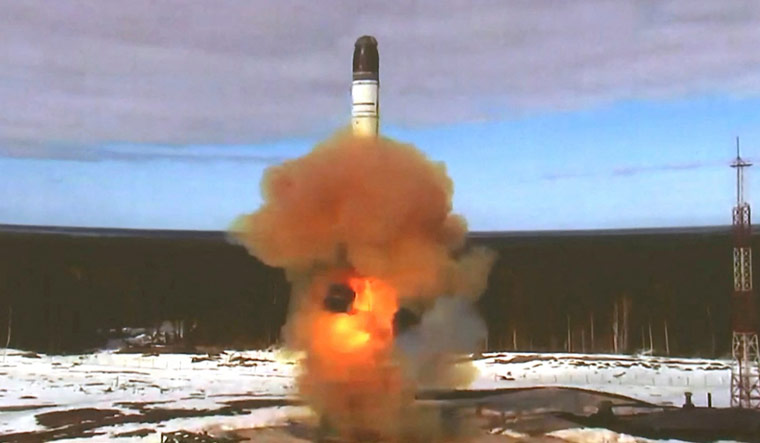 The Sarmat missile being test-fired | Reuters

“This truly unique weapon will strengthen the combat potential of our armed forces, reliably ensure the security of Russia from external threats and make those who, in the heat of aggressive rhetoric, try to threaten our country, think twice,” Putin was quoted as saying by AFP.

The Sarmat was test fired from “Plesetsk in northwest Russia and hit targets in the Kamchatka peninsula, nearly 6,000km (3,700 miles) away”, Reuters said.

Putin added, “The new complex has the highest tactical and technical characteristics and is capable of overcoming all modern means of anti-missile defence. It has no analogues in the world and won't have for a long time to come.”

The Sarmat is believed to have a range of about 18,000km, making it capable of hitting virtually any target in the world from Russia. It is also capable of carrying around 10 independent nuclear warheads, which would complicate efforts by enemy missile defences to intercept it. The Sarmat can also carry decoys to fool interceptor missiles fired at it.

However, the capability to carry these independent warheads—which are known as multiple independently targetable re-entry vehicles (MIRVs)—is not unique to the Sarmat or Russia. The US, UK, France and China have had missiles carrying MIRVs for decades.

So what's the big deal?

While normal ballistic missiles also have high speeds, they have only limited manoeuvring capabilities after re-entering the atmosphere. Hypersonic weapons—whether cruise missiles or glide vehicles—can manoeuvre in the atmosphere, making it difficult for enemy radars to track or surface-to-air missiles to shoot down. Analysts believe the Sarmat will be among the main launch platforms for the Avangard.

The Avangard is “launched like a traditional ballistic missile, but instead of following an arc high above the atmosphere, the re-entry vehicle is put on a trajectory that allows it to enter Earth's atmosphere quite quickly, before gliding, un-powered, for hundreds or thousands of kilometres,” the BBC explains.

In 2018, Putin claimed the Avangard had a speed of Mach 20, that is 20 times the velocity of sound. Analysts estimate the Avangard has a range of about 6,000km and believe it can deploy a nuclear payload. Analysts believe a single Sarmat could deploy around three to five Avangard vehicles.

The Russian government claimed in 2019 it had operationally deployed the Avangard.

Why the Avangard-Sarmat combination matters

And then, there is FOBS

Putin had previously claimed the Sarmat has the range to travel over the South Pole. This was interpreted as an attempt by Russia to revive a quaint Cold War era concept: the Fractional orbital bombardment system (FOBS). FOBS was a concept of launching a nuclear warhead from a missile into low-earth orbit (LEO) at an altitude of about 150km. The warhead would stay in orbit until it was required to strike a target. When it was conceived, FOBS was intended to 'surprise' the then-existing US missile warning radar network, which had been focused on detecting missiles flying over the North Pole.

While the US has improved its radar coverage and also uses satellites for the purpose, the combination of the Sarmat with hypersonic weapons could give its FOBS capability a new lease of life, given its improved survivability against enemy defences.

In August last year, China is believed to have tested a hypersonic weapon that had characteristics of FOBS.